Stock reaches highest valuation since split from JDSU almost exactly a year ago. 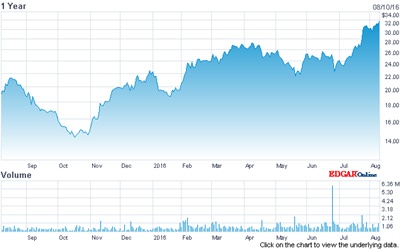 “Wow, what a year!” That was how Lumentum CEO Alan Lowe kicked off an investor conference call marking the photonics company’s first full fiscal year as an independent outfit.

And while progress in high-power fiber laser sales had previously been hampered by technical issues, those now appear to have been overcome, with “dramatic growth” in sales expected next year as key customer Amada rolls out new systems.

Sales split
At $241.7 million for the three months that ended June 30, total revenues were up 16 per cent on the same period last year. Even after the JDSU split, Lumentum’s sales remain dominated by the various optical communications markets, which accounted for $201.2 million of that total – up 13 per cent on last year.

Commercial laser sales amounted to $40.5 million in the latest quarter, up by more than a third on the prior year as high-power fiber laser sales specifically rose more than 50 per cent to $14.3 million.

Reporting solid demand for the forthcoming quarters, Lowe told investors: “The book-to-bill ratio was greater than one, as North America metro deployments begin to ramp, hyperscale data centers ready themselves for the shift to 100G, customer demand for fiber lasers is strengthening, and demand in China remains robust.”

The strong rate of growth - full-year sales of $903 million were up from $837.1 million in fiscal 2015 - has provided a welcome boost on the company’s bottom line, as Lumentum swung to a net income of $9.7 million in its first independent fiscal year, compared with the net loss of $24.5 million in the previous year.

“Demand continues to be strong,” Lowe said. “At Lumentum, we are focused on using our photonics technology to accelerate the speed and scale of cloud, networking and advanced manufacturing.

“The rapid growth in cloud computing, streaming video, mobile and other high-bandwidth applications, is placing enormous demands on networks in terms of capacity, connectivity and efficiency.”

Capacity constraints
In fact demand has been so strong that Lowe admits Lumentum has been forced to leave millions of dollars worth of sales “on the table” because of capacity constraints. Shipments of key products like reconfigurable optical add-drop multiplexers (ROADMs) operating at the in-demand 100G rate will remain supply-limited until additional production capacity comes on line over the next three months.

Lowe told investors: “While we added capacity, demand still exceeded our ability to supply during the fourth quarter. We experienced challenges with some of our suppliers, which also impacted our ability to meet our customers’ demand.

“We continue to bring new capacity online and are working closely, very closely, with our suppliers to improve their delivery. However, we expect we will remain supply-limited during the first quarter.”

Despite the challenges of capacity constraints, Lowe also said that Lumentum would remain “prudent” in terms of its investments in manufacturing, wary of the dramatic overcapacity problems that have crippled many in the optical communications sector in previous boom-bust periods.

Lowe is also hopeful of seeing an uptick in sales revenues next year from Lumentum’s 3D optical sensing products – technology used in gesture control interfaces, most successfully in Microsoft’s “Kinect”.

Admitting that this part of the business was in something of a sales “trough” right now, he said that investment was ongoing, with lots of potential for applications to take off.

Among the opportunities Lowe mentioned were sensing applications in mobile phone cameras, regular PCs and automobiles, where automation is a huge and growing trend.

• Ahead of the latest earnings call, Lumentum's stock was trading at $32.13, up strongly from its debut price at $19 on the Nasdaq exactly a year earlier and equivalent to a market capitalization of just under $2 billion.