Technical University of Munich method aims to correct for propagation effects in tissue. 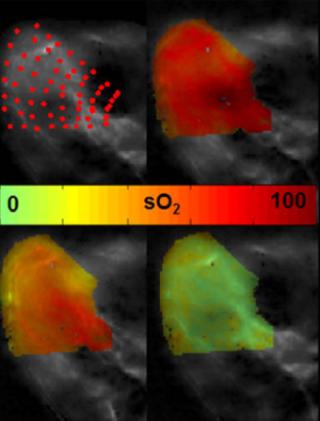 Accurate measurement of tissue oxygenation has become a crucial goal in the study of several medical conditions, including cardiovascular disease, diabetes, and in the diagnosis and treatment of cancer.

The central role of oxygen in the development of tumors and the exploitation of this dependency as a potential weapon against them was specifically mentioned earlier this year as part of the US national "moonshot" anti-cancer initiative, which aims to double the pace of progress against the disease.

Optoacoustic imaging is one focus of attention, thanks to way that multi-spectral optoacoustic tomography (MSOT) performed at multiple wavelengths can use the differential absorption of oxy- and deoxy-hemoglobin to assess oxygenation in tissue.

A study at the Technical University of Munich (TUM) has addressed one of the hurdles said to be inherent in the optoacoustic approach, by developing a new algorithmic technique to correct for the effects of light propagation through tissues and hence improve the accuracy of blood oxygenation data. The work was published in Nature Communications.

Stratis Tzoumas of TUM explained that the accuracy of MSOT's oxygenation measurements normally remains limited by the way in which the intensity of light changes with depth - influenced by the layers of tissue that the light passes through and the effects those tissues can have on the scatter and absorption of different wavelengths of light.

"There have been several attempts to solve this problem by calculating how the tissue will affect the propagation of light, but due to the high optical complexity of organic tissues, this approach could not be flexibly applied in optoacoustic images of living subjects," commented Tzoumas.

The TUM method, termed eigenspectra MSOT (or eMSOT), adapts an approach already known from hyperspectral imaging, and avoids the need to simulate the fluence distribution for every image from a study of the tissues involved. Instead it models a large number of variant base spectra from first principles, and then fits these to the experimental data using a new algorithm - the intention being to account for wavelength-dependent light attenuation without explicit knowledge of the tissue's optical properties.

More accurate performance
Tests carried out on mouse tissues in vivo showed that the eMSOT approach could deliver more accurate data about blood oxygen saturation compared to a conventional linear unmixing analysis of non-fluence corrected images. According to the team, the existing approach overestimated oxygenation as a function of image depth when checked against reference data recovered surgically from the test subjects, while the eMSOT method performed better.

"Effectively, eMSOT converts imaging of oxygenation from a problem that is spatially dependent on light propagation and optical properties, to a problem solved in the spectral domain," noted the team in their published paper. "In all cases tested, eMSOT offered from comparable to significantly more accurate performance over conventional spectral optoacoustic methods."

Next steps for the project include validating eMSOT with a larger pool of tissue physiology interrogations, and possibly addressing the substantial computation time that tends to be required for analyses of this kind.

Sarah Bohndiek of the University of Cambridge, whose group is using MSOT and other bioimaging techniques to better understand the role of oxygen in tumor growth, commented that the approach developed by TUM held promise as a possible way to deal with the challenges of quantifying oxygenation, although further study of its use in practice was needed.

"Approaches to simulating or measuring the fluence distribution within an object are computationally or hardware intensive, and this approach based on the derivation of a few reference base spectra appears to provide a more robust estimate of oxygen saturation than traditional methods," she commented. "Broader application in a range of model systems and further in vivo validation will be needed to determine whether it can replace the current methodology for oxygenation assessment."