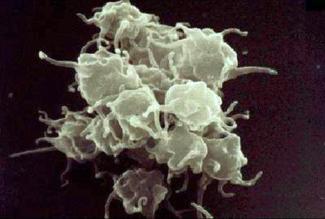 A blood disorder called thrombocytopenia can cause uncontrollable bleeding in sufferers, thanks to a shortage of platelets - the blood cells that are involved in the job of clotting in damaged vessels.

Treatment for the condition has to date centered either on drugs or transfusions of fresh platelets to restore the balance, with accompanying risks of infection or other surgical complications.

A team at the Wellman Center for Photomedicine has now developed a laser-based therapy that could provide a less invasive route to treatment. The results of the technique tested on mice were published in Science Translational Medicine.

It involves the use of a low-level laser (LLL), a near-infrared source with a relatively low power density that does not cause heating or other thermal effects in the target.

The Wellman LLL - or "cold" laser - was a 810 nm diode laser operating in continuous wave mode. The source's power density was 15 mW/cm2 and the treatment time was just over three minutes, exposing the target to an energy density of 3 J/cm2.

Results showed that LLL illumination of that order was indeed capable of increasing platelet production in thrombocytopenic mice. In particular the treatment boosted platelet generation from precursor cells called megakaryocytes (MKs) in bone marrow, rather than through action on the other platelet progenitor and stem-cell precursors targeted by existing therapeutic techniques, reducing a known risk of thrombosis caused by those methods.

"Directly stimulating the differentiation of MKs the way all current drugs do risks clotting if platelet levels rise too high," commented Mei Wu of the Wellman Center. "LLL appears to enhance MKs' inherent ability to produce platelets most effectively in response to low platelet levels in the circulation, a response that stops when platelet levels are normalized."

A safe, drug-free method
LLL has been in use since the 1960s, and the Wellman team noted that it has previously been investigated as a way to improve wound healing, relieve pain, and treat conditions including stroke and neurodegenerative disorders.

There has however been a historical debate about the benefits of LLL compared to other sources of infrared radiation or conventional heat therapy. The Wellman study may now offer a route for the technique into more sophisticated clinical scenarios, although possibly not those where thrombocytopenia results from inborn genetic defects.

"While LLL has been employed in research and in clinical treatment for decades, this is the first study reporting that it can promote mitochondrial biogenesis," noted Wu. "This result suggests that a safe, drug-free method that does not depend on donated blood products can be developed for treating or preventing thrombocytopenia."

The team noted that one current obstacle to testing LLL in human patients is the lack of a device large enough to treat the entire body with an appropriate laser energy, or to at least reach enough bones to stimulate sufficient platelet production - something the Wellman project now plans to address.