Business-led development and commercialization proposals worth up to £2m each are invited. 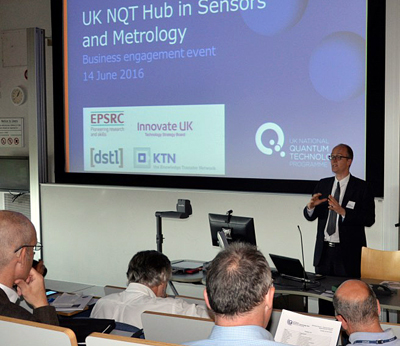 Innovate UK, the UK Government’s technology research funding agency, has announced a new funding competition focused on the commercialization of quantum technologies. Appropriate UK businesses can now apply for a share of the £19.5 million ($25.9 million) available for the development of quantum technology prototypes or to establish technical or market feasibility of projects.

Innovate UK and the Engineering and Physical Sciences Research Council have committed to invest the funding in quantum technologies, many of which are likely to be purely photonics based or photonics-related.

Innovate stated that the aim of this competition is “to encourage collaborative research projects and feasibility studies that will either: develop prototype devices and demonstrators of quantum technologies or their component technologies improve the understanding of the technical, business or market challenges of taking a new device or service to market".

Typical quantum-based technology sectors which could have commercial potential include: clocks, sensors, imaging, communications, computing, or other devices that use quantum effects of superposition or entanglement. In its specified requirements for successful applications, Innovate adds that “proposals must be collaborative and a business must lead the project.

The Innovate website gives the following advice: “We expect feasibility sudies will range from total costs of £50,000 to £400,000. Projects should last between 6 months and 1 year.” And for the collaborative research and development projects, Innovate adds, “We expect these projects to range from total costs of £500,000 to £2 million. Such projects should last up to two years and must be completed by 31 March 2019.”

Briefing events for potential applicants will take place across the UK, as follows:

Innovate UK will hold extra events in Birmingham and York and a webinar briefing on 6 September 2016.

In June, UK-based business professionals from more than 50 organisations gathered with academics from the UK’s Quantum Technology Hub for Sensors and Metrology in Birmingham to discuss emerging quantum technologies and how partnerships could benefit various sectors of industry. The Hub is based at Birmingham University, but is part of a national network based at various UK universities.