Studies of ionization may reveal how and when the early universe switched from dark to light. 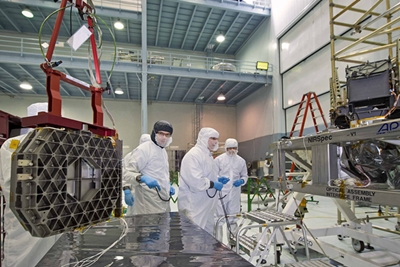 Infrared spectroscopy is expected to aid the quest to understand the birth of the very first galaxies, during a period when the universe transformed from a largely dark place to its most active period of star formation.

Richard Ellis from the European Southern Observatory (ESO) told another packed house at SPIE’s Astronomical Telescopes and Instrumentation (AST) meeting that the NIRSpec kit on board the James Webb Space Telescope (JWST) will look for signs of “reionization” of hydrogen just a few hundred million years after the Big Bang.

Galaxy birth
In a plenary talk entitled “Let there be light: the observational quest for the first galaxies”, Ellis said that the field was one of the fastest-moving subjects in astronomy and astrophysics, and that new ground-based telescopes would shed more light on the topic – thanks to adaptive optics technology.

“The challenge is to witness and physically understand the birth of the first galaxies,” the professor of astrophysics told delegates in Edinburgh, pointing out that while Hubble Space Telescope images have shown that star-forming galaxies were likely present in the first billion years of the universe, exactly when and how they were born remained a mystery.

“During this period early stars and galaxies formed, and the universe became bathed in ultraviolet light for the first time,” Ellis said. “Sometime during this era hydrogen in the intergalactic medium also transitioned from a neutral gas to one that was fully ionized.”

What he hopes JWST’s spectrograph and the emerging suite of extra-large ground telescopes now under construction can reveal is what was going on during that first billion-year period. Recent data from the European Space Agency’s Planck satellite suggests that the reionization began after around 400 million years, which is later than had previously been thought.

But that should also mean that the transition from a dark to a light universe was late enough to be probed with telescopes. Although Ellis says that the field was currently “stymied” by the lack of optical gathering power available, that would soon change as the emerging class of mega-telescopes are completed and JWST is launched.

Spectroscopic tools
In fact, infrared spectroscopy looks like the most promising tool to search for the signs of the cosmic reionization, because it is possible to look for distant red-shifted Lyman-alpha emission lines from ionized hydrogen.

Capable of performing spectroscopy at wavelengths out to 5 µm, JWST’s NIRSpec will be able to do this. However, the answer to a major question remains unknown: did enough infrared light escape from those relatively dark early galaxies to remain detectable today? 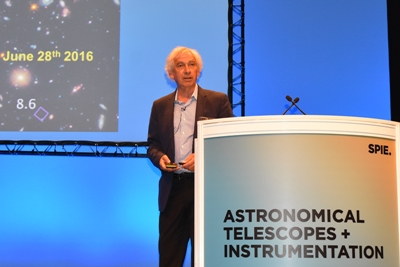 Paradoxically, it will be the ground-based telescopes – rather than JWST - that are better able to look more directly for signs of early galaxy formation. Being able to view the earliest galaxies relies on the gravitational lensing effect caused by much nearer objects, and it is only with adaptive optics that telescopes are able to deliver the degree of angular resolution required to distinguish between them.

“This subject is moving so rapidly that I could not have given this talk even one year ago,” Ellis concluded. “It is an amazing and exciting time for those who are working on this.”