Engineers at KIT replicate the geometry of a rose petal's surface on photovoltaic cells. 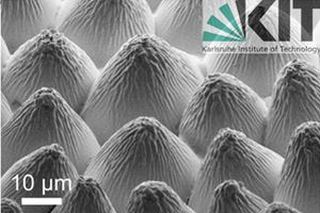 The power of flowers: structures modelled on rose petal surfaces

Plants and photovoltaic cells share one key design goal: to trap as much light from as wide a spread of incident angles as possible.

A team led by engineers at Karlsruhe Institute of Technology (KIT) has taken its cue from the botanical world, and incorporated transparent replicas of a rose petal's epidermal cells into an organic photovoltaic structure.

The result was a gain in relative efficiency of twelve percent, according to the quoted figures published in Advanced Optical Materials.

Developers at KIT and the Center for Solar Energy and Hydrogen Research Baden-Württemberg (ZSW) made the breakthrough after first studying the optical properties of epidermal cells from a number of different plant species, with a view to identifying the ones with the most favorable antireflection effects - the key parameter in this application.

Rose petals turned out to be particularly strong performers, naturally equipped with a surface structure designed to impart stronger color contrasts as encouragement for pollination. That structure consists of a disorganized arrangement of densely packed microstructures, combined with additional ribs formed by randomly positioned smaller nanostructures.

The next step was to recreate this structure over a larger area, for which the project developed a manufacturing process involving a polydimethylsiloxane mould to produce the microstructures and UV-curing adhesive to secure them in position.

"This easy and cost-effective method creates microstructures of a depth and density that are hardly achievable with other artificial techniques," commented Guillaume Gomard of KIT's Light Technology Institute.

Disorganized structures
When the transparent epidermis-like structures were put in place on an organic solar cell, the power conversion efficiency was found to have improved by twelve percent for vertically incident light compared to an unaltered cell. The quoted improvement was even larger for shallower incident angles of illumination.

KIT attribute this effect to the omnidirectional anti-reflection properties of the replicated epidermis material, which can drastically reduce surface reflection even for angles of incidence approaching 80 degrees.

Subsequent examination also showed how each individual replicated epidermal cell works as a microlens and extends the optical path within the solar cell, increasing the probability that an incident photon will be absorbed and contribute to the cell's performance.

The same principle might now be applied to other botanically inspired structures. "Our method is applicable to both other plant species and other PV technologies,” said Gomard. "The surfaces of plants have multifunctional properties, so it might be possible in the future to apply several of these distinct modification operations in a single step."

The results of this research also open up further questions about the role of disorganization in complex photonic structures, and the ways in which the next generation of solar cells might benefit.