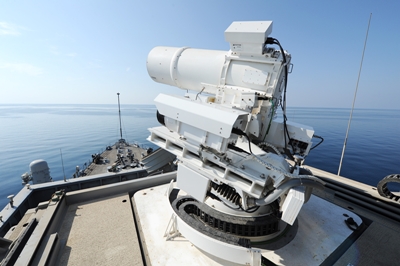 Laser munitions: on board USS Ponce

The US National Photonics Initiative (NPI) is calling for a co-ordinated strategy covering the development of high-power laser systems for defense and industry applications, under the guidance of a dedicated directed energy program office.

Recommendations from a task force set up by the NPI and the Directed Energy Professional Society include higher and more focused funding to ensure critical components are manufactured in the US, as well as “intelligent control” policies that protect key technologies without damaging their export by US companies.

SPIE’s CEO Eugene Arthurs, who co-chairs the task force alongside Scott Keeney, the CEO of fiber laser and diode maker nLight, said: “US funding for high-power laser programs has declined over the last decade, just as technology is on the cusp of practical implementation for the warfighter.

“High-volume manufacturing of high-power lasers is key to drive both technology improvements and further reduce costs for the growing use in advanced manufacturing.”

Foreign threats
Revealing its recommendations to coincide with this week’s Directed Energy Summit held in Washington, DC, the task force is also concerned about foreign threats, both commercial and defense-related.

“Currently, volume manufacturing of high-power lasers is moving offshore, where technology transfer enables foreign defense threats that erode the US industrial base,” noted an NPI statement.

“At the same time, foreign competition has expanded rapidly – particularly in China and Russia,” it added. “A directed energy program office will also serve to enhance policies that intelligently protect critical technologies while not inhibiting the success of US exporting companies.”

Turning to industrial concerns, Keeney said: “The US is a global leader in manufacturing high-power lasers, but the US industrial base is losing its competitive advantage.

“Investing in a directed energy program office will support a coordinated strategy that not only ensures the domestic supply of critical components required for high-power lasers for defense but also supports commercial applications such as cutting, welding and additive manufacturing.”

Export restrictions
One problem for US laser firms is that current arms-related regulations restrict fiber-laser exports from the likes of Nufern, Rofin-Sinar, and Coherent. What the NPI is seeking is support for the infrastructure relating to both industrial lasers and emerging laser weapons technology.

To some degree those two elements amount to the same thing, considering the huge commercial success that IPG Photonics has enjoyed with its high-power fiber lasers, and the same company’s involvement in laser weapons under development at, for example, the European missile systems firm MBDA.

Meanwhile Alan Willner, who chairs the NPI’s steering committee and is also the current president of the Optical Society (OSA), indicated that laser weapons technology was nearing real-world deployment. He said:

“Unlike previous laser applications that required significant advances in fundamental science and technology, the high-power laser technology required for many directed energy applications is now ready to make a major impact.”

The latest recommendations echo the findings of an April 2015 report from the US think-tank the Center for a New American Security (CNAS), which also called for a higher level of technology development funding and a joint program office on directed energy weapons, as well as an identifiable “champion” within the US Department of Defense.

“The directed energy weapons area is a technological orphan – influenced by many and owned by none,” wrote Jason Ellis, the deputy program director for defense at Lawrence Livermore National Laboratory who authored the CNAS report.

The NPI task force convened leading defense contractors, commercial laser companies and academics to produce its recommendations - although optics.org understands that none of IPG, Trumpf, or Rofin were closely involved.