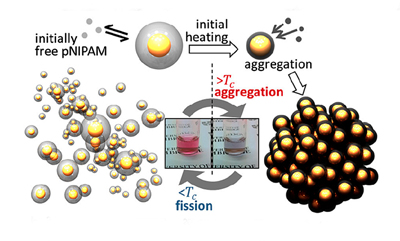 Like real ants, the nano-devices produce large forces relative to their weight.

Researchers at Cambridge University, UK, have developed what they are calling the world’s tiniest engine – just a few nanometers across – which is powered by light. They say that the nanoscale engine could form the basis of future nano-machines that could navigate in water, sense the environment, or even enter living cells to fight disease.

The prototype device is made of tiny charged particles of gold, bound together with temperature-responsive polymers in the form of a gel. When the nano-engine is heated by a laser, it rapidly stores large amounts of elastic energy, as the polymer coatings expel the water from the gel and collapse. This has the effect of forcing the gold nanoparticles to bind together into tight clusters. But when the device cools, the polymers take on water and expand, and the gold nanoparticles are strongly and quickly pushed apart, like a spring. The results are reported in the journal PNAS (Proceedings of the National Academy of Sciences).

“It’s like an explosion,” said Dr Tao Ding from Cambridge’s Cavendish Laboratory, and the paper’s first author. “We have hundreds of gold balls flying apart in a millionth of a second when water molecules inflate the polymers around them.”

“We know that light can heat up water to power steam engines,” said study co-author Dr Ventsislav Valev, now based at the University of Bath. “But now we can use light to power a piston engine at the nanoscale.”

The new approach to nano-machines developed by the Cambridge researchers is incredibly simple, but can be extremely fast and exert large forces. The forces exerted by the devices are several orders of magnitude larger than those for any other previously-produced device, with a force per unit weight nearly 100 times better than any motor or muscle. According to the researchers, the devices are also bio-compatible, cost-effective to manufacture, fast to respond, and energy-efficient. 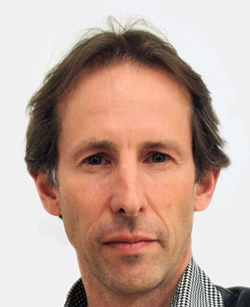 Professor Jeremy Baumberg from the Cavendish Laboratory, who led the research, has named the devices ANTs, or actuating nano-transducers. He commented, “Like real ants, they produce large forces in relation to their weight. The challenge we now face is how to control that force for nano-machinery applications.”

The research suggests how to turn Van de Waals energy – the attraction between atoms and molecules – into elastic energy of polymers and release it very quickly. “The whole process is like a nano-spring,” said Baumberg. “The smart part here is we make use of Van de Waals attraction of heavy metal particles to set the springs [the polymers] and water molecules to release them, which is a very reversible and reproducible process.”

The team is currently working with Cambridge Enterprise, the University’s commercialization arm, and several other companies with the aim of commercializing this technology for microfluidics bio-applications. The research is funded as part of a UK Engineering and Physical Sciences Research Council (EPSRC) investment in the Cambridge NanoPhotonics Centre, as well as the European Research Council.

An extract from the journal article explains the background to the work and its justification: “Scientists have dreamt of nanomachines that can navigate in water, sense their environment, communicate, and respond. Various power sources and propulsion systems have been proposed but they lack speed, strength, and control. We are introducing a new paradigm for nanoactuation, which is incredibly simple, but solves many problems. It is optically powered (although other modes are also possible), and potentially offers unusually large force/mass ratio. This concept can underpin a plethora of future designs and already we produce a dramatic optical response over large areas at high speed.

“Nanoactuators and nanomachines have long been sought after, but key bottlenecks remain. Forces at submicrometer scales are weak and slow, control is hard to achieve, and power cannot be reliably supplied. Despite the increasing complexity of nanodevices such as DNA origami and molecular machines, rapid mechanical operations are not yet possible. Here, we bind temperature responsive polymers to charged Au nanoparticles, storing elastic energy that can be rapidly released under light control for repeatable isotropic nano actuation."