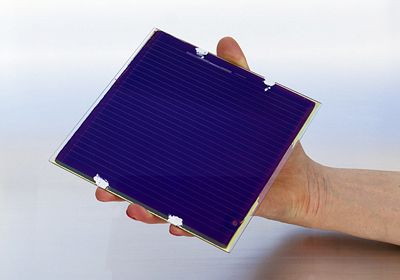 This efficiency was measured on an aperture area of 168 cm2. Twenty-five cells were serial-connected through an optimized P1, P2, P3 interconnection technology. The PV module was realized on a 6 x 6in glass substrate using an industrially scalable slot die coating technique in combination with laser patterning. Furthermore, the PV module was packaged by applying a flexible barrier using a lamination process.

The researchers say that this result was achieved as a consequence of the intensive collaboration within the Solliance consortium. Based on previous optimization on 16 cm2 modules, the Solliance team transferred this to a 6 x 6in glass substrate using the developed blade coating process and the optimized mechanical patterning technology. In this, case a 156 cm2 aperture area module with 10% efficiency was developed, consisting of 24 interconnected cells. This was then used as starting point for the achieving the 168cm2 PV module. 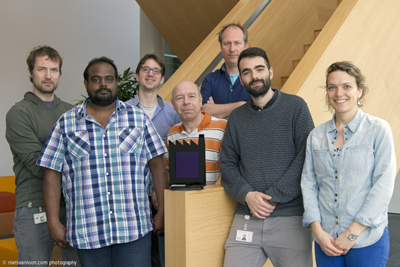 These results demonstrate the up-scalability of this new thin film PV technology, says the team. Apart from the electrodes currently used, all layers can be processed in an ambient environment and at temperatures below 120⁰C.

This shows the low production cost potential of this rapidly-emerging thin film PV technology. Furthermore, the deposition and interconnection technologies used for obtaining these results are industrially-available for sheet-to-sheet and roll-to-roll manufacturing processes. The latter technique will allow for creating high-volume production in the future.

“The current world record efficiency of a small lab-scale perovskite-based PV cell is 22.1%,” said Ronn Andriessen, Program Manager of the Perovskite based PV program at Solliance. “The challenge is to upscale perovskite cells to larger industrially process-able modules with high efficiency and long lifetimes at low cost. The current result, presented on an aperture area comparable to standard commercial silicon solar cells, shows that Solliance, with its in depth know how on processing of organic PV and CIGS and its vast Sheet-to-Sheet and Roll-to-Roll pilot production infrastructure, is well placed to achieve this upscaling. These 10% up-scaled perovskite based PV modules are first and important steps in this development.

“We are confident to boost quickly the up-scaled Perovskite based PV module efficiency further above 15% by using very low cost materials and processes. But besides demonstrating the up-scalability of these highly efficient Perovskite based PV devices, we are also currently working hard to stabilize further the performance of these devices under real life operational conditions,” Andriessen added.