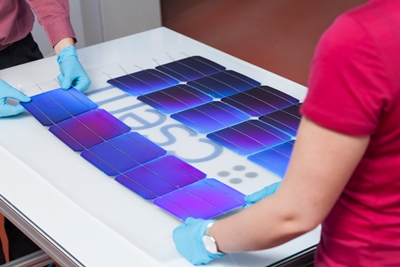 The additional area, by way of an extension to the CHF19 million investment by the Swiss government used to set up the facility three years ago, means that the PV lab is now fully operational.

The 50 employees at the PV center are working on new types of solar cells that promise to drive down the cost of solar energy, including silicon heterojunction (HJT) devices and novel perovskite modules – including a radical tandem silicon/perovskite combination.

Christophe Ballif, director of the CSEM PV center, said in release from the institution. "Although solar energy is enjoying rapid growth, it is still far from being used to its full potential – in association with everyday objects, for example."

HJT development
CSEM claims that its work to improve the performance of silicon cells using HJTs and other novel approaches has resulted in the development white and colored panels – said to be a world first that has been a hit with architects.

“CSEM has set up a complete platform for the production and the characterization of monofacial and bifacial both-side contacted silicon HJT solar cells, as well as for advanced back-side contacted devices,” reported a technical team from CSEM last year.

A combination of improvements, including new conductive oxide layers in the cells for higher optical transparency, culminated in a 22.8 per cent efficient large-area HJT solar cell – fabricated using industry-compatible processes but with fewer steps than are normally employed in cell production.

“Calculations show that, with [HJT] solar cells, the average levelized costs of energy could be below €0.04 per kWh in sunny countries,” claims the CSEM team. “These costs are comparable with base-load electricity produced from non-renewable resources.”

Perovskite project
On the perovskite front, a CSEM-led team is working under the Swiss “CHEOPS” project to make a 15x15 module with a conversion efficiency of at least 14 per cent.

That would represent a significant advance on what has been demonstrated so far: while small-scale perovskite cells have reached efficiencies of 22 per cent in a remarkably short development time, that performance is yet to translate to large-area devices at the kind of sizes needed to be genuinely useful.

The infrastructure housed at the PV-center collaboration with the Ecole Polytechnique Fédérale de Lausanne (EPFL) includes specialty systems for coating, patterning, printing, and fabrication processes, as well as pilot manufacturing lines – from glass cleaning and wafer etching up to the assembly of functional modules. The facility can also process fully printable PV modules.