Industry giant looks to raise nearly €1 billion in historic separation of lighting business set up by founder Frederik Philips in 1891. 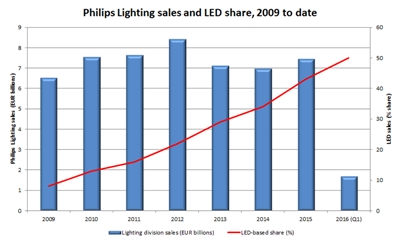 Philips is aiming to raise around $1.1 billion through the sell-off of a minority stake in its lighting business, according to an initial public offering (IPO) prospectus.

The prospectus states that Philips is aiming to sell 25 per cent of the unit, equivalent to 37.5 million shares, at an offer price of between €18.50 and €22.50. It amounts to a maximum €844 million, although an over-allotment option could push the total to €970 million if exercised.

The sale price range implies a market capitalization of between €2.78 billion and €3.38 billion, for a business that posted sales of nearly €7.5 billion in 2015. The lighting unit will also carry net debts amounting to around €950 million.

New chapter
The lighting business unit was the foundation on which Philips was built, after Frederik Philips and his son began selling incandescent light bulbs back in 1891.

But with the industry currently in the midst of a transformation because of the efficiency, long lifetime and controllability of LEDs compared with incandescent bulbs, Philips has been looking to sell the lighting unit since September 2014.

CEO Frans van Houten said in a statement accompanying the prospectus: “Today’s announcement is an historic one for Philips as we aim to separate our company into two market-leading companies focused on capturing opportunities in the health technology and connected LED lighting solutions markets, respectively.”

Just last month Philips reported that in the opening quarter of 2016 LED-based lighting sales had accounted for more than half of total lighting sales for the first time, with conventional lighting sales slumping 20 per cent compared with the previous year’s figure.

Investor interest
The offer period runs through Wednesday May 25 for retail investors, and through midday May 26 for institutional investors, with the final offer price and allocation set to be announced shortly afterwards.

From Friday May 27, the Philips Lighting shares will be listed on the Euronext Amsterdam exchange, under the symbol “LIGHT”. Unconditional trading in the stock is then scheduled to begin May 31.

While Philips will be subject to “lock-up” conditions preventing the sale of further stakes in the lighting business over the course of the first 12 months of trading, the parent company says that it is aiming to sell all its remaining shares over the next “several years”, so that it can focus all its attention on the “health-tech” business.

And although the company ultimately failed to find an outright buyer for the division at an acceptable price, Eric Rondolat, CEO of Philips Lighting, claimed: “The interest we have received from the investor community in Philips Lighting is very encouraging.”

With the lighting division IPO plans now firmly in place, Philips will also be able to focus on the sale of its combined automotive and LED-making Lumileds division. A deal agreed with China-led private equity group Go Scale Capital was aborted earlier this year because of US concerns over national security.