Compound annual growth rate of close to 10% tempered by high product costs, according to BCC Research. 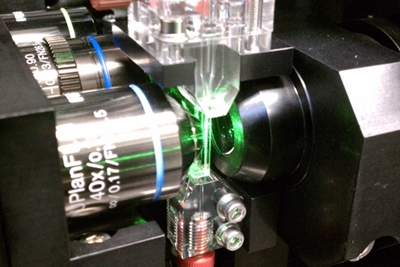 A new report from analyst company BCC Research predicts that flow cytometry, the laser-based technique used in an increasing number of bio-analysis applications, will grow in importance to become a $6.3 billion industry by the end of the decade.

BCC’s John Richard Rahn reckons that the market is set to grow at a compound annual rate of more than 9 per cent through 2020, although that expansion will be muted somewhat by the generally high cost of equipment.

He is predicting “significant changes” over the next five years as the technology establishes a growing base in biotechnology labs for applications like counting, sorting, biomarker detection and protein engineering.

Hardware segment to reach $3 billion
Flow cytometry is a form of optofluidics technology, and involves suspending cells in a stream of liquid and passing them through a laser-based electronic detection system, using techniques like fluorescent labeling for rapid, simultaneous analysis of multiple physical and chemical characteristics of the cells.

The market for flow cytometry reagents will grow slightly more rapidly, at an average rate of nearly 12 per cent over the next five years.

"The expansion of flow cytometry applications from cellular analysis to molecular and genomic analysis, increasing research and development spending, and a shift in small-molecule drug discovery will grow the market," reckons Rahn.

He adds that recent market consolidation, a trend that is expected to continue during the forecast period, has already produced strong, vertically integrated competitors that are better able to compete as sole-source vendors to end users.

Miniaturized cell sorting
The emergence of small and easy-to-use laser systems should further expand applications of flow cytometry to routine clinical laboratories, and although Rahn warns that the high cost of equipment will constrain growth, he added:

“In 2016, a private company focused on the goal of commercializing COST (color space-time) coding in flow cytometric sorting is planning to release a compact cell sorter priced under $100,000. Should this technology, a disposable cell sorting chip capable of three-way sorting, prove commercially viable, its adoption will greatly reduce the size and cost of flow cytometry instrumentation.”

Although BCC did not specify the company involved, San Diego-based Nanosort has previously worked on the development of just such a portable “lab-on-a-chip” flow cytometer under a series of small business innovation research (SBIR) grants from the US Department of Health and Human Services.

According to details in a Phase II SBIR grant application awarded in 2012, the Nanosort approach involves six-color detection with a photomultiplier tube. The technology was said to be scalable to 10,000 units per year.

“We have invented and patented three techniques that enable the development of a sorting flow cytometer at a fraction of the cost and size of conventional instruments, using microfluidics to channel cells, piezoelectric actuators to sort cells, and a technique called Color-Space-Time coding [COST] to detect several colors with a single detector (as opposed to one detector per color in conventional instruments),” claimed Nanosort at the time. “Reductions in costs and complexity make this new nanosorting device accessible to any researcher, advancing biomedical discovery.”

According to the company the “fusion” of optics and fluidics has been aided by the integration of its Semrock and Melles Griot divisions in recent years. Gus Salem, the head of IDEX’s “health and science” business unit – within which Melles Griot and IDEX sit – said that the new portfolio would “dramatically reduce” customers’ production and after-market costs.

Another small company attempting to make a name for itself in flow cytometry is Albuquerque's Eta Diagnostics, whose CEO Mike Cumbo was previously president of the IDEX optics and photonics operation. Eta's "massively parallel" flow cytometer is based on technology developed at the University of New Mexico's Center for Biomedical Engineering, and is said to be capable of detecting bladder cancer cells in urine and counting rare circulating tumor cells in blood.

• The BCC Research report Flow Cytometry: Products, Technologies and Global Markets analyzes the sector by segments including instruments, reagents, software, services, technologies, applications, and end users, technology, by type, and by end-user application. It is available now via the BCC web site.