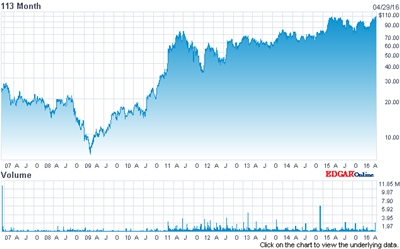 Nearly a billion dollars was wiped off the value of fiber laser company IPG Photonics as markets reacted badly to the Massachusetts firm’s latest set of financial results.

At $207.2 million for the opening three months of 2016, its sales were up 4 per cent on the same period last year, despite the negative impact of the strengthening US dollar during that time.

But with net income down 14 per cent to just under $50 million and forecast sales of between $235 million and $250 million in the June quarter, investors who had been hoping for a stronger outlook sent IPG’s stock tumbling nearly 16 per cent.

The Nasdaq-listed company had been trading at an all-time high of around $103 per share just before the earnings statement, equivalent to a market capitalization of some $5.4 billion. Shortly after the earnings release, that value had fallen to $4.6 billion.

Laser-welded space station?
Regardless of that, IPG’s executive team appeared in typically confident mood as they discussed the latest quarter with investors. "We continue to see large opportunities to expand our business through both existing and new OEMs and end-users as we develop innovative products to address applications beyond our core markets,” said CEO Valentin Gapontsev. “We are making significant progress on the testing and development of these new product lines and we look forward to their launch.”

Expanding on the new applications that customers were finding for IPG’s fiber lasers, Gapontsev told investors that the company had recently shipped a system to an aerospace customer for welding large-scale shell parts that will feature in the future international space station project that has been mooted by the Russian federal space agency.

“In the oil industry, we have overcome a symbolic milestone by finishing, with a great success, a half-year test of our new orbital laser welding system for drilling rigs directly in field conditions,” added the CEO. “It is the first in the world.” Gapontsev expects to begin making commercial shipments of that system later this year.

Continuing with the energy theme, he told the quarterly investor conference call that another unique technology developed for welding the large-diameter (1.4 meter) tubes would soon be used for transcontinental gas pipelines.

Gapontsev said: “We should start field tests in May. If results are positive, as we are sure [they will be], a tier-one customer promised to start purchasing such multi-million dollar stations shortly.”

Turning to the automotive sector, the CEO added: “We have been qualified by a major automotive firm for all of its transmission welding projects. Three other firms have qualified us for powertrain welding applications. These customers previously used CO2 lasers.”

Those and other deals are expected to help the company recover strongly from what had been - by IPG's standards - a relatively weak quarter from the welding sector, although sales to the key market of China have remained solid.

Digital cinema
At February’s Photonics West exhibition, IPG showed off its new six-laser luminaire aimed at digital cinema applications. Since then the kit has made an appearance at the large CinemaCon event in Las Vegas, and Gapontsev confirmed that a second prototype has now been delivered to a top-ranking customer.

“[At CinemaCon] we demonstrated our digital laser luminaire to the cinema industry and saw enthusiastic interest in this new product line from major players in the industry,” he told investors. “We believe that IPG’s laser luminaire will deliver a new standard of brightness and dynamic range which the industry is demanding for a new generation of premium 2D and 3D cinemas over the coming years.”

In typically outspoken manner, Gaponstev also took the opportunity to comment on the recent burst of consolidation in the laser sector. Two of its direct rivals – Rofin-Sinar and Coherent – have announced plans to merge, while Newport is set to become part of MKS Instruments imminently.

However, he does not believe that those developments will fundamentally change the dynamic of the markets that IPG addresses, or present any greater competitive threat to the company. “We remain focused on improving our existing products and launching innovative new products in order to strengthen our technology lead and expand into new markets,” said Gapontsev.

CFO Tim Mammen added that he believed IPG was at the very least maintaining its high market share. Noting that shipments of high-power lasers – as measured by total kilowatts of output – jumped 17 per cent on the same period last year, he added that the sales figure growth lagged behind as a result of currency effects and lower selling prices.

Referring to the company’s own cost reductions, he said: “This is a key element of our strategy and is done in order to maintain our competitive position and also to drive an increase in the demand for high-power lasers in new and existing applications - which we believe will drive a continued expansion of the total laser market over time.”

One of IPG’s current projects on the cost-reduction front is its development of a new generation of laser diode chips to pump the active fiber in its lasers. Mammen and Gapontsev suggested that the new emitters would produce a 50-70 per cent boost in power compared with current devices, translating to a likely 30-40 per cent decrease in the average cost-per-watt of output power.

Macroeconomic clouds gather
Although IPG’s executives were keen to stress the various positive developments in the quarter, they also reported that the company’s sales of quasi-CW (QCW) sources fell 14 per cent compared with the same period last year.

Mammen attributed that to lower demand from the microelectronics industry, which uses these lasers in fine welding and hole-drilling applications.

Noting more general concern about the global economy, the CFO added: “We are not alone in referencing that the quarter was impacted by the ongoing mixed and uncertain macroeconomic environment and a difficult start to the year, particularly in parts of Asia and Europe.”

And in comments that went some way to explaining the sharp drop in IPG’s stock price following the earnings release, Mammen added: “We have to recognize that our ability to achieve low-double-digit growth for 2016 is more uncertain than it was previously.”

The CFO said that this meant a “recalibration” of growth expectations was now required, with IPG’s annual sales now predicted to grow by 5-10 per cent in 2016. Last year, the company had said it believed growth of 10-15 per cent was possible, which would have seen its annual revenues break through the billion-dollar level for the first time if correct.