Dennis Werth lined up for leadership role, with current Newport CEO offered post on the MKS board of directors. 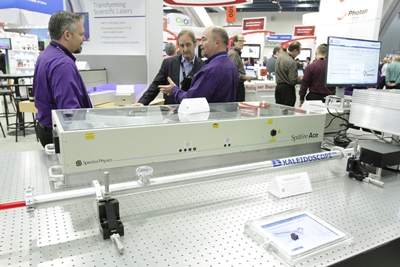 MKS Instruments’ planned $980 million acquisition of the photonics company Newport is set to close this Friday, April 29, according to MKS’ CEO Jerry Colella.

Colella told an investor conference call discussing MKS’ latest financial quarter earlier this week: “We have received all the necessary regulatory approvals, secured financing for the transaction, and subject to the approval of the transaction from the stockholders of Newport, we anticipate closing this Friday.”

Dennis Werth, who is currently senior VP of Newport’s photonics division (Newport recently restructured into two divisions – photonics and lasers - with the latter including the Spectra-Physics operation), looks set to head up the operation as senior VP of Newport following the deal’s closure, reporting to Colella directly.

And according to a filing with the US Securities & Exchange Commission (SEC), the current Newport CEO, Robert Phillippy, has been offered a post on the MKS board on completion of the deal.

Synergies
Discussing the impending Newport transaction, Colella said that he had been encouraged by comments from existing MKS customers – particularly some of its largest clients in the semiconductor sector - about the opportunity for integrating MKS and Newport technologies.

In response to an investor question, the MKS CFO Steve Bagshaw added: “After the deal was announced one of our largest end users called us and said, ‘we want to talk about optical sensing’. We think the combination of optics that Newport provides and the sensing capability of MKS is a game-changer in the fab and on the tool.”

He said that one example of the potential benefits to customers would be to apply Newport’s expertise to environmental monitoring, where MKS is already incorporating optical technology into its products.

“We have a dedicated integration team in place and have developed extensive plans which include product cross-selling and synergy activities immediately after the acquisition closes,” Colella added. “We anticipate reinvesting some of the savings in these activities into high-growth areas within Newport's product portfolio.”

When announcing the acquisition, MKS said that it anticipated making around $35 million in annual cost savings.

Bagshaw also confirmed that MKS had successfully arranged a $780 million term loan to finance the Newport acquisition – with the interest payable on the loan turning out to be lower than expected because of oversubscribed demand.

Multiple suitors
Meanwhile, Newport’s SEC filings also revealed that the company was involved in merger and acquisition discussions with no fewer than five different parties in the months leading up to the MKS announcement.

The documents detail talks with the various potential suitors taking place throughout the second half of 2015, as Newport sought an acquisition price of at least $25 per share – although they also noted the risks involved in some of the deals, which could have raised anti-trust or financing issues.

In the end, the all-cash MKS deal that the Newport board accepted valued the photonics company at $23 per share. Although slightly below the $25 target, that still represented a 50 per cent premium at the time, and a valuation that Newport had last achieved back in 2002.