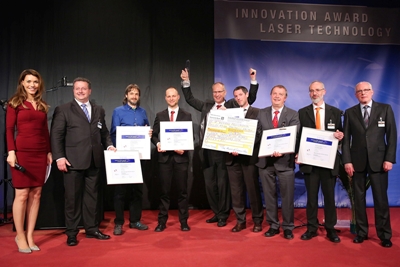 A development team from Philips Photonics in Aachen, Germany, has won the latest Innovation Award Laser Technology handed out by the Arbeitskreis Lasertechnik (AKL) association and the European Laser Institute (ELI).

Armand Pruijmboom, general manager at Philips Photonics, and his colleagues picked up the award - along with a €10,000 cash prize – at this week's biannual AKL conference. The event is also taking place in Aachen.

The Philips team won first place for their work on new high-power VCSEL arrays for applications in “digital thermal processing”. They have improved the packaging and thermal management of the semiconductor laser arrays by using techniques such as comprehensive finite-element modeling.

The approach is expected to replace much older technologies such as gas burners, hot air blowers and electrically or halogen-lamp-heated belt ovens in industrial applications that could benefit from precise heating.

While conventional laser technology has proved too expensive to displace these old approaches, requiring either complex optics or scanning systems, the VCSEL arrays can provide heat exactly where and when it is needed – and bring a degree of “digitization” to this element of industrial manufacturing.

“The technology is bound to penetrate a large number of manufacturing processes and thereby adds a new and cost-effective member to the family of high-power lasers,” reckons the Philips Photonics team.

Audi and Coherent
Beaten into second place was a group from German car maker Audi for their use of remote laser welding for lightweight aluminum parts, including for example welds in the door frame of the firm's A8 car. Audi is said to be the first car manufacturer to use laser remote welding to join conventional aluminium alloys.

In third place was a group from Coherent’s German operation in Göttingen, who have developed a new excimer laser lift-off process that allows displays to be transferred onto thin and lightweight polymer carriers for the first time.

The winners were selected by a 10-person international jury, of which six members were from Germany and one came from each of France, Finland, Spain and the UK. The finalists were selected from 15 original applications.

As part of the recognition for winning, Pruijmboom receives the twin titles of “AKL Fellow” and “ELI Fellow”. The finalists appeared at an award ceremony in Aachen hosted by AKL president Ulrich Berners, and ELI president Paul Hilton, who was also part of the jury panel.