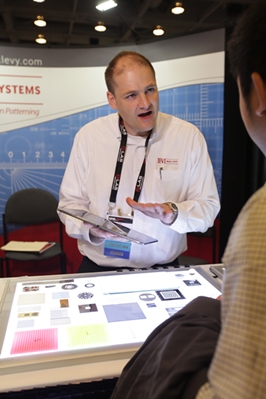 Diversified optics and photonics company II-VI has posted record figures for sales, bookings and earnings in its latest set of quarterly accounts, thanks in part to the addition of recent acquisitions Epiworks and Anadigics.

Long-time CEO Fran Kramer that the Pittsburgh-headquartered firm had benefited from strength in optical communications markets during the opening three months of calendar 2016. The laser materials processing sector is also looking good, with a 10 per cent rise in bookings compared with the same period last year.

The positive outlook prompted a 7 per cent rise in the company’s stock price following the update, pushing its valuation to levels not seen since early 2012.

VCSEL ramp
Part of the reason for the record quarterly sales figure of $205 million was the initial contribution from Epiworks and Anadigics, which were both acquired by II-VI during the quarter – the latter following something of a bidding war with another interested party.

Kramer, along with company president Chuck Mattera and CFO Mary-Jane Ryamond, reported bookings of $81.8 million for II-VI’s “laser solutions” segment, up 12 per cent on the same period last year.

Meanwhile the II-VI photonics division posted a dramatic 43 per cent year-on-year rise in bookings, to $103 million. That helped to push total quarterly bookings to a record $235.5 milllion – up 20 per cent on the opening three months of 2015.

“We are optimistic about the continued revenue and earnings growth from the photonics business segment during the next six to nine months,” Kramer told investors. “Couple that with the laser solutions segment, which should experience a solid quarter in its historically strong fourth quarter, and that means we should deliver a revenue upside as we end fiscal year 2016 [in June].”

The CEO added that II-VI would start investing in the build-out of VCSEL manufacturing capacity, with “significant results” expected over the next 12-24 months. Expanding on the strategic thinking behind the VCSEL investments made by the company, Mattera told an investor conference call:

“These [Epiworks and Anadigics] acquisitions complement the leadership position of our Laser Enterprise division in the rapidly growing semiconductor laser market, a key driver of our investments into a market that industry analysts expect to grow to over $5 billion by 2020, including a $2 billion VCSEL market.”

One of the analysts predicting sharp growth in demand for VCSELs is Gaurav Bhushan from the BCC Research consultancy, who recently told optics.org: "The current market leaders in the VCSEL space are Finisar, Avago Technologies, Lumentum (formerly JDSU), Sumitomo Electric Industries, and II-VI Laser Enterprise."

As well as the applications outlined by II-VI, Ghushan sees the emerging markets of autonomous vehicles and collision-avoidance technologies as "exciting" ones for VCSELs, with key automotive part suppliers like Denso showing an interest recently.

6-inch wafer platforms
Both of the acquired operations have developed 6-inch wafer diameter processes for VCSEL production – meaning that II-VI should be able to ramp device fabrication relatively quickly. At the moment, most VCSELs are produced on 4-inch semiconductor wafers, and the larger format should offer significantly more cost-effective manufacturing – assuming that good device yields can be achieved.

Anadigics has traditionally focused on the production of radio-frequency chips – for example power amplifiers used in smart phones – but after suffering in a competitive market had looked to fill out its New Jersey wafer fab diversify by developing the 6-inch VCSEL process.

“This platform provides us with a running start to scale for future applications of the semiconductor laser devices that are designed, developed and marketed by our team at Laser Enterprise headquartered in Zurich,” Mattera said.

“We have begun our integration efforts, including assessing our options to reduce costs and improve operational efficiencies, even in the short-term, while we have prepared to invest in the development and qualification of our six-inch VCSEL platform.”

Turning to Epiworks, Mattera added: “They offered us differentiated technology, a 6-inch diameter epitaxial wafer growth capability, a scalable platform, and a time-to-market advantage. Their broad product portfolio and the growing end markets that they address are RF wireless, optical and data communications, data center interconnect, and the emerging 3-D sensing and Internet of Things markets.”

Anadigics options evaluated
The addition of Anadigics and Epiworks puts around another 300 people on the now 9000-strong II-VI roster, Mattera said, while integration of the various divisions has already started.

Exactly what II-VI intends to do with the RF side of the Anadigics business, which sits outside of the typical markets that it addresses, remains to be seen. Kramer responded to an investor question on the topic by saying: 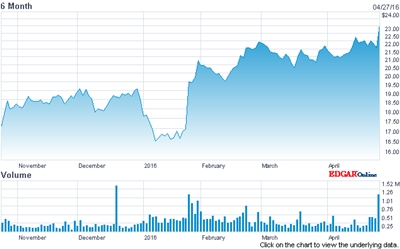 On the up: II-VI's stock price (past six months)

“We're analyzing the best way for us to structure the business, and we have put together four options that we are evaluating.” Among the options under discussion are to continue to operate the RF side, setting up a joint venture to run it as a separate entity, selling it off, and shutting it down.

Acknowledging the complexities and costs of running an advanced semiconductor wafer fab at low capacity utilization, the CEO added: “It will take us the better part of this quarter to figure it out completely. But we know we have more costs than what we're used to carrying for this business, so we are working on those options.”