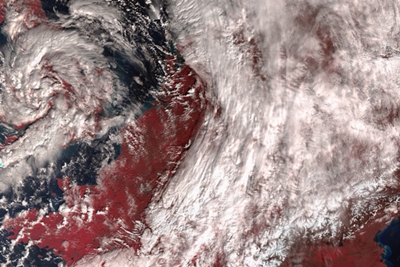 Sentinel-3A satellite view of storm Jake over the UK

The three METimage instruments, scheduled for launch at seven-year intervals from 2021, are intended to provide data across an extended spectral range - allowing more environmental measurements relating to the Earth’s atmosphere to be collected.

“Critical information on cloud formation, sea-surface temperature and winds, air quality and temperature will enable scientists to improve the accuracy of meteorological and climate forecasting to protect life on Earth,” said e2v.

Offering a ground resolution of 500 meters, the METimage instruments will be based around e2v’s front-illuminated 4T pixel CMOS linear devices, yielding data in the visible and near-infrared focal plane.

Chelmsford-based e2v explains that the application demands a high signal-to-noise ratio in order to capture the precise brightness of the images at a particular wavelength, while image scanning at regular intervals along Earth’s curvature demands a large-pixel design.

Those Sentinels are part of the wider Copernicus program to provide a much-improved network of environmental sensing satellites, and the project is already well under way: the latest “Sentinel 1B” payload was launched by the European Space Agency just this week.

The concept for the future METimage instrumentation has been developed and patented by Airbus DS in collaboration with German firm Jena-Optronik.

Once launched, the instruments will be operated by EUMETSAT, the intergovernmental provider of weather and climate data to 30 member states, including several currently outside the European Union like Turkey, Switzerland and Norway.

CMOS vs CCD
e2v has previously developed bespoke detectors for dozens of space and satellite imaging projects, although until now most of those have been based on the more traditional and typically more sensitive charge-coupled device (CCD) architecture.

The adoption of CMOS technology for the METimage program provides further evidence of the shift towards using devices more suited to large-scale production with conventional silicon wafer manufacturing processes.

However, CCDs still feature heavily in legacy projects and one of e2v’s advanced CCD chips was launched aboard the ESA’s ExoMars mission last month.

The company’s devices are being used by the Nadir and Occultation for MArs Discovery (NOMAD) instrument, which comprises two infrared and one ultraviolet spectrometer. e2v provided six back-illuminated CCDs for the ultraviolet and visible (UVIS) channel of NOMAD.

Shortly before that the Sentinel-3A imager, which is also fitted with a CCD sensor developed by e2v, began sending back its first high-definition images of the Earth. One of its key features is a huge swath-width of 1400 kilometers, allowing the instrument to return images of large areas. The Sentinel-3A image at the top of this story - one of the first returned by Sentinel-3A - clearly shows storm Jake over the UK.