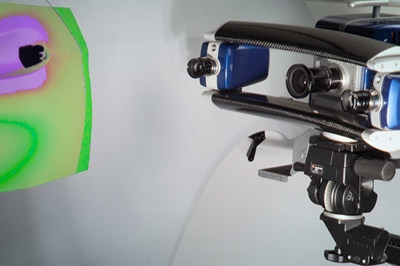 The Swedish company Hexagon AB, a major provider of surveying and information technology tools with an annual turnover of more than €3 billion, is set to acquire Germany-based optical metrology specialist AICON 3D Systems.

Founded in 1990 and headquartered in Braunschweig, AICON now employs more than 140 people and posted sales of around €19 million in 2015. The deal is set to close this month.

AICON has developed particular expertise in portable coordinate metrology equipment for a variety of applications and its high-precision optical 3D measuring systems have been adopted in the automotive and aerospace sectors.

As well as the German operation, AICON has established subsidiaries in China, Korea, Japan, and the US, plus a network of resellers worldwide.

In a statement to the Swedish stock exchange, Hexagon CEO Ola Rollén said: “AICON is a recognized brand with strong core technical competence across its development teams and its scanner portfolio is a strategic fit.

The same technique is also used to inspect large tubes, for example ensuring that bend angles and other dimensions in the high-pressure pipes critical to steam-water circuits in power plants are correct.

Last year, the company launched its new “stereoSCAN neo” system – said to be the first white-light scanner with adaptive full-color projection and back projection for direct object metrology.

Unusually, AICON has two CEOs - Carl-Thomas Schneider and Werner Bösemann. In a company statement announcing the Hexagon deal, they said: “Joining Hexagon is a great opportunity to bring our first-class AICON scanner products to a wide range of customers worldwide.”

The deal is the latest in a series of acquisitions by Stockholm-listed Hexagon. Since the start of 2016 it has announced four other additions, adding manufacturing software, ground-penetrating radar and lidar expertise to its growing portfolio.

Hexagon sees this technology as a prime candidate for the US Geological Survey’s planned 3D Elevation Program (3DEP), which is intended to create a highly detailed, three-dimensional map of the entire US.

The Swedish firm already has some expertise in lidar thanks to another of its subsidiaries, Switzerland-based Leica Geosystems. One of Leica's laser scanning and imaging instruments was used to generate the first 3D laser scan of the ice cap at the summit of Mont Blanc, the highest mountain in Europe.