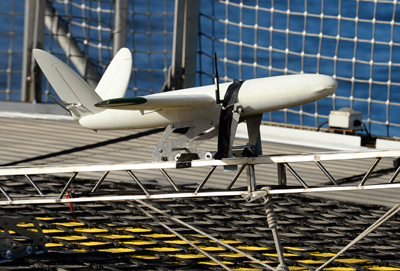 A tiny pilotless aircraft (“UAV”), developed and built by the UK’s University of Southampton, has been launched from the Royal Navy’s ice patrol ship HMS Protector for the first time to assist with navigating through the Antarctic. The 3D-printed aircraft, along with a quadcopter, scouted the way for the Navy’s survey ship so she could find her way through the thick ice of frozen seas.

This is first time the Royal Navy has used unmanned aerial vehicles in this part of the world, following tests that took place in UK waters, last year. The service has also been operating so-called ScanEagle “eyes in sky” from frigates in the Arabian Gulf for the past couple of years, which feed vital live imagery back to ships on maritime security patrols. The 3D printed craft launched from Protector are smaller and less hi-tech, but still provided the icebreaker with real-time high-quality information courtesy of a detailed picture of the surrounding environment from a perspective that is only available from the air. 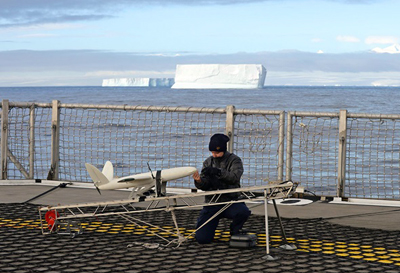 The quadcopter was used for short-range reconnaissance missions, while the 3D-printed mini aircraft was sent on longer patrols. Developed by experts at the University of Southampton University, the laser-sintered aircraft – dubbed SULSA – is made of nylon, printed in four major parts and assembled without the use of any tools.

Having been tested off the Dorset coast last summer with HMS Mersey, the 3kg aircraft was given a much more rigorous work-out over Antarctica. After flights of up to 30 minutes’ duration it was fished out of the icy waters by one of HMS Protector’s boats so it could be launched once more. Dramatic video footage of the Antarctic seas was captured and the aircraft was safely and reliably operated under the supervision of Andrew Lock, from the University’s Computational Engineering and Design research group. 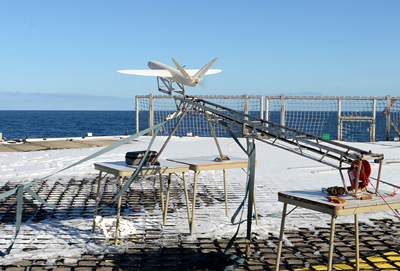 We have lift-off! SULSA launching from HMS Protector.

“This trial of these low-cost but highly versatile aircraft has been an important first step in establishing the utility of unmanned aerial vehicles in this region,” said Captain Rory Bryan, Protector’s Commanding Officer. “IThese tests have demonstrated to me that this is a capability that I can use to great effect.”

Andy Keane, Professor of Computational Engineering at the University of Southampton, commented, “The series of flights conducted by Southampton staff in conjunction with the Royal Navy from HMS Protector has been a great success. These flights have shown just what can be achieved with smart design and low-cost, digital manufacture.” 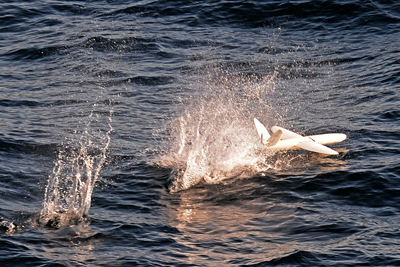 Landing on water: It flies, it floats.

Professor Keane told optics.org, “We use a company called 3T RPD, which is based in Newbury, UK, to do the printing of our aircraft components. The UAV cannot as yet be built on a ship because the printers need to be on a very stable base when in use. We are considering licensing our UAV designs.”

The results of Protector’s trial have been fed back to Royal Navy headquarters in Portsmouth, 700X Squadron in Culdrose – the Navy’s dedicated unmanned aircraft unit – and the Maritime Warfare Centre at HMS Collingwood. Lt Cdr John Breen, Trials Management Officer from 700X worked closely with Andrew Lock throughout the project. 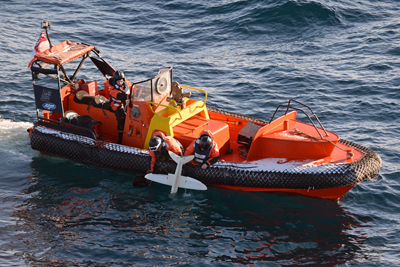 “I am delighted with the successful deployment of small unmanned aerial vehicles from HMS Protector in the Antarctic,” said Commodore James Morley, the Navy’s Assistant Chief of Staff Maritime Capability. “The whole team has overcome significant hurdles to demonstrate the enormous utility of these aircraft for affordable and persistent surveillance and reconnaissance from ships – even in the environmentally challenging environment of the Antarctic.

“Although this was a relatively short duration trial to measure the relative merits of fixed and rotary wing embarked systems, we are continuing to review our options for acquisition of maritime unmanned aerial vehicles in the future.”

The following RN video captures some of the launch and flight from the recent "Project Albatross" test in the Antarctic: