A day-long special conference focused on graphene and its possible uses was one of the key workshops staged at SPIE’s Photonics Europe 2016 in Brussels, last week. Despite the travel problems arising from the terror attacks in the city on March 22, there was good attendance at Graphene-based Photonics Technology: Transitioning from Research to Commercialization.

Among the technical discussions about manufacture and potential applications, event co-chairs Frank Koppens (ICFO - The Institute of Photonic Sciences) and Nathalie Vermeulen (B-PHOT – Brussels Photonics Team at the Vrije Universiteit Brussel) invited a range of graphene experts to predict the nature of the first graphene-based devices and when they would actually become available (of which more below) .

The day comprised four distinct sessions, looking at different aspects of graphene and its integration into various devices: (1) photonic devices for data communications; (2) infrared and terahertz applications in detection and sensing; (3) wafer-scale processing and integration; and finally (4) interested industries, commercialization, next steps and challenges.

The “Interested Industries” session provided several updates on the latest research into real applications and lively discussion and not a little disagreement about if and when graphene will support some sort of new industry following its longstanding status as the solution looking for problems.

Addressing the potential introduction of graphene onto the market Templ commented, “I believe that the proper commercialization of graphene into various communications applications is about five to ten years away. It’s important that we don’t end up with a dead end such as we did with the likes of carbon nano-tubes and buckyballs. To avoid this it will be necessary to look closely at the early stages of the development of this technology so it can be developed in a similar way to successful semiconductor technologies.”

Klaas-Jan Tielrooij, of ICFO, commented, “Graphene seems to offer fast capabilities in data communications in the NIR and faster photo detectors also seem possible but what other applications could exploit the potential of graphene in detection? Perhaps in the future we could do datacoms at different wavelengths. Also, photo-detection is not only useful for communications, there could be other applications – in security for example.” 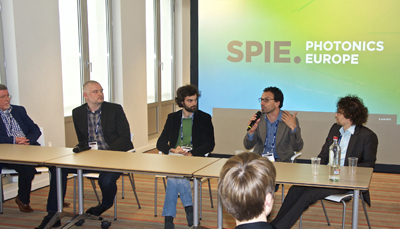 An unusual potential application of graphene-based systems was outlined by Bjarke Jørgensen, of Newtec, a Danish SME producing machinery for the handling and optical grading of fruit and vegetables. “You might wonder why such a company would be interested in graphene,” he said. “Well our CEO believes that graphene is the new plastic, promising new opportunities. There is a huge market where graphene applications could have a significant impact in the improvement of food processing technologies across Europe.”

Newtec has been in graphene research for five years. Jørgensen said, “We have been looking at direct production of graphene structures using diffused assisted synthesis in conjunction with photolithography; we are able to grow micro graphene structures on various substrates. We have also spent quite some time on CVD and we have actually grown graphene from a potato!”

The company considers that an important potential application of graphene is in hyperspectral imaging, such as for the analysis of vegetables, to examine water content, sugar content, ripeness, defects - ultimately whether a foodstuff is suitable for a particular purpose. We would like to be able to integrate visible, near and far infrared scanning, so we are looking for broadband detectors and hopefully graphene technology will gives us the best of both worlds.”

Stijn Goossens described some of the substantial research projects into graphene at Barcelona’s ICFO: “We are a relatively young institute – having opened only in 2002. But now more than 300 researchers are working in various fields of photonics. We have nice facilities to do graphene research, which I have been doing for more than two years, since completing my PhD.”

"ICFO has a total of 11 research groups looking at different aspects of graphene, comprising more than 50 dedicated researchers. In my case, it is a hybrid graphene light detector which is the technology I want to develop into potential markets.” 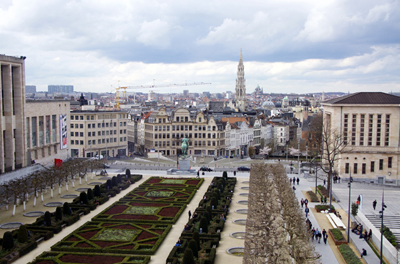 The PE16 expo was held at the Brussels Square conference center.

Considering potential applications of graphene in gas sensing, Koppens asked the panel whether they would favor simple small-scale projects (based on 100mm or possibly 200mm wafers) or would they prefer to go for what he called the “big fish”?

Cedric Huygebaert, imec, answered: “These are two different markets so I’m sure we will need to demonstrate a little bit of maturity with integration of graphene to address both of these eventually. To address real markets, we know that graphene success will not be achieved from labs alone so whether it’s 200mm or 300mm wafers is not important. But the important thing is how we will integrate graphene and silicon devices.

”There has been some integration already. If we want to embed these materials in more depth and more layers and with more functionality, we will need more integration before we can become successful with graphene."

The next topic to be addressed was the material quality, performance and reliability of the graphene and possible integrated devices; was there the need for a quality standard for graphene, asked Koppens. Hedges commented: “It is important that when we go to the market we are supplying the graphene that people want. I would look at using the same sort of standardization employed by the companies that currently make silicon wafers. At the end of the day, it will be customer requirements that will drive the device makers and determine the standards that we have to meet.”

”In the case of graphene,” he added, “there is not yet a supply chain. Outside of this room, a lot of people don’t have a clue [about graphene quality] and we don’t seem to have a means of dealing with this problem. This industry needs to look at the same cycles followed by the semiconductor industry. We need to show that it is possible to get production quality repeatable and at a professional standard.”

On this subject, Goossens commented, “A possible show stopper is the degradation of the material.There is also the possibility that graphene will degrade after a period of usage at high power operation. So far there have probably not been enough studies for this issue to be known.”

Other technical issues were discussed including the lack of band gap available in graphene, which could render it less useful for integrated photonics-electronics systems; and whether the graphene developers had considered potential health problems associated with the material and even whether public opinion could be a factor in its success or otherwise.

How soon will there be graphene devices?

Closing the workshop, which due to its own momentum and the high level of interest from the floor, had overrun by almost one hour, Koppens posed the final questions: what would be the first application of graphene as a product in the market and when?

Daniel Neumaier suggested a type of Hall effect sensor “for local inspection of substrates to put on top of a tip to analyze materials within a scanning surface imager, within a year or so”.

Cedric Huygebaert thought it would be “a far back end of the line application, perhaps a type of gas sensor and maybe within four years.”

Stijn Goossens believed a type of graphene light sensor could be developed within three years, with an application that could be in hyperspectral scanning.

Bjarke Jørgensen said, “Broadband detectors is where we will see the first application of graphene,” but he added as an alternative, “perhaps also in 3D printing for the home, enabling the printing of conductive structures such as conductive plastic within one to two years.”

Paul Hedges said, “Anything where you have integrated to a CMOS system at the back end will take a number of years to develop. The early graphene systems will probably be membrane-type sensors, which could be developed in a few years or so.”