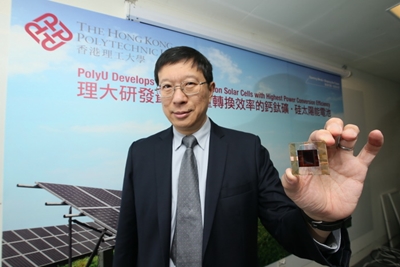 Photovoltaics experts at the cleantech analyst company Lux Research believe that commercial perovskite solar cells (PSCs) could start to appear from 2019, as a fast-growing band of academic researchers gets to grips with the key problem of cell stability.

Perovskite materials have become one of the hottest areas of photovoltaics research in recent years, with a surge in journal publications on the topic. The best cell conversion efficiencies have jumped from lower than 4 per cent in 2009 to more than 21 per cent this year.

And in a new analysis written by Lux’s Tyler Ogden, the emerging technology is tipped for initial applications in indoor energy harvesting – where the ability of perovskites to withstand humidity and oxygenation are much less of an issue than in large rooftop modules. Uses at first could include power generation for sensors, displays, and RFID tags.

Ogden has identified a handful of university research laboratories to watch as more perovskite spin-outs are launched and the technology advances, and points out that some of the leading research teams are yet to hook up with commercial partners - meaning partnership opportunities with top scientists are still available.

Publications boom
In the Lux report, Ogden highlights the sudden, dramatic rise in academic publications on the topic. In 2012 there were still only a handful of papers on perovskite PV, rising to around 50 the following year. But in 2014 that total jumped to more than 400, before trebling to around 1200 last year.

“The academic partners of Dyesol and Oxford Photovoltaics - Michael Grätzel and Henry Snaith respectively - are clear leaders in the field of perovskite solar cells, lending their expertise to strong development efforts that set a high bar for new entrants to beat,” Ogden writes.

“Reflective of their strength, the University of Oxford and EPFL identify the UK and Switzerland as putting out the strongest research. Nonetheless, there are global opportunities for partnerships for players seeking to enter into the perovskite space. Nam-gyu Park at Sungkyunkwan University in South Korea is a major contributor with no clear industry ties, while the Weizmann Institute of Israel and the Nanyang Technology University in Singapore also are potential targets for partnership.”

The analyst adds that the top publishing universities in Japan, South Korea, Germany, Italy, Canada, and the US should also be explored for partnership opportunities. 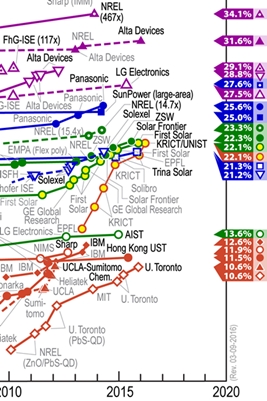 Stability comes into focus
With the question of efficiency performance now largely answered (see chart, left), Ogden sees cell stability and cost as the chief remaining concerns, while the validity of claimed efficiency levels must also be addressed before commercialization can take place.

Although the Oxford and Dyesol teams are already pushing aggressively to develop commercial prototypes, Ogden does not expect any true commercialization until 2019 at the earliest. “Given the remaining questions surrounding the questions of stability and toxicity, it is unlikely that a company will develop a commercially viable perovskite solar cell and scale it prior to 2019,” he says.

Of the various types of perovskite cell architectures that are under development, so-called “scaffolded” designs have shown the best efficiencies thus far, along with hints of good stability and limited hysteresis – another of the technological issues that needs to be solved.

“Practically, this means that efficiency claims for scaffolded PSCs should be considered more reliable than other cell architectures,” Ogden reports. “However, the metal oxide scaffolds require annealing at high temperatures, questioning the possibility of low-cost manufacturing processes.”

On the other hand planar cell designs that are similar to traditional thin-films would allow low-temperature processing but are less stable than scaffolded architectures.

Tandem opportunity
Where Ogden sees the greatest opportunity is in tandem modules, where the integration of perovskite with either crystalline silicon or thin-film technology could effectively raise the conversion efficiency of conventional, cheap PV panels to that of a high-performance material.

While the latter approach is likely to involve simpler production processes, the integration with incumbent technology ought to present the largest market opportunity for tandem modules and push the efficiency of crystalline silicon modules above 30 per cent.

“The possibility of incorporating perovskites with existing crystalline silicon technology offers the most promise for the emerging technology, but also the most difficulty,” Ogden told optics.org. “Significant work needs to go into developing manufacturing equipment for tandem cells, particularly in how to integrate the process with existing cell lines.”

He believes that we are more likely to see a standalone perovskite solar module arrive at the market first, and the lead developer targeting that application is Dyesol. “The company has demonstrated a mini-module and has made progress in improving the stability of the technology on the cell level,” said Ogden, adding that Dyesol still has significant work to do in terms of scaling up its process to a full-area module with acceptable efficiency and stability.

Toxicity risk ‘negligible’
One thing that virtually all perovskite cells have in common is that they are based on lead – something that might be viewed as problematic when it comes to environmental regulations. However, Ogden told optics.org: “The inclusion of lead in the most researched and developed perovskite solar cells is more of a public relations issue than a technical or regulatory one.”

The analyst points out that the amount of lead in most perovskite solar cells is below levels set in regulatory guidelines, and suggests that the exemptions gained by First Solar for its thin-film cadmium telluride panels demonstrate how toxic heavy metals can be contained, indicating that any risk of environmental leakage is negligible.

“Researchers are well aware of this problem and have conducted studies showing that it is possible to mitigate lead leakage from perovskite solar cells as well,” Ogden adds.

Looking at the options for improving stability, some recent work from a Hong Kong Polytechnic University collaboration with Jianghan University in Wuhan, China, suggests that using lead thiocyanate as precursor material, in place of the usual halide mixture, could offer much greater stability. Ogden says that if these initial results turn out to be reproducible, lead thiocyanate could become a common precursor.

Latest 'breakthrough': 25.5% tandem cell
So many researchers are now working on perovskite cells that apparent “breakthroughs” appear on a near daily basis. This week saw another group at the Hong Kong Polytechnic University claim a record-breaking tandem device operating at 25.5 per cent (see image at top of story).

According to lead researcher Charles Chee Surya there are three innovations behind this development: low-temperature annealing in dry oxygen to reduce the impact of crystal defects; layers of molybdenum and gold to maximize transparency; and a “haze film” mimicking the surface morphology of rose petals on the top layer of the cell to increase light trapping.

Assuming that the efficiency figure can be confirmed, Ogden says that it would represent an impressive result, particularly in moving closer to exceeding the potential 30 per cent target cited by many researchers. He points out that although the 25.5 per cent efficiency figure claimed is still below the record for a crystalline silicon cell, it is only by the slenderest of margins - just 0.1 per cent.

• Lux Research’s report, entitled The Rise of Perovskites: Identifying the Best Academic Partners to Work With, is available now via the analyst company’s web site.