US consultancy expects global revenues to near-triple to $2BN by the end of the decade. 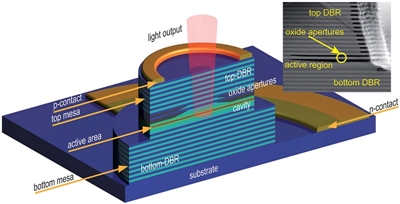 Annual sales of vertical-cavity surface-emitting lasers (VCSELs) are set to grow rapidly over the next few years as new applications like gesture recognition and data storage increase in popularity.

Analysts at Massachusetts-based BCC Research believe that global revenues currently stand at just under $800 million, but will swell to $2.1 billion in 2020.

Diversifying market
The application landscape is currently dominated by deployments in short-range fiber-optic data transmission links, which account for nearly half of that total. But developments including better efficiency, longer-wavelength emission (most commercial VCSELs operate at around 800 nm) and tunability will see the applications market diversify.

"VCSELs have been widely adopted in the data communications industry," commented BCC analyst Sinha Gaurav. "The growth is attributed to increased demand for VCSELs with low-energy optical storage and fast switching in servers and high-capacity data centers.”

Diagnostic and therapeutic uses in medicine are also anticipated, for example in optical nerve stimulation and computed radiography imaging, with the superior electrical efficiency of VCSELs compared with LEDs set to expand their adoption in proximity-sensing applications.

II-VI expands VCSEL capacity
One company that could be set to benefit from the increased demand is II-VI, which recently expanded its VCSEL production capacity through the twin acquisitions of New Jersey-based radiofrequency component maker Anadigics and the Illinois foundry company EpiWorks.

II-VI was forced into a bidding war that saw the cost of the Anadigics acquisition more than double in just a couple of months, but such was its desire to “get ahead of the curve” with VCSEL production capacity that it was prepared to pay a significant premium on the deal.

In January, II-VI president Chuck Mattera told investors that there was strong interest in VCSELs from the market but that the precise timing of any ramp in production would depend partly on the capability of the supply chain.

Acquiring Anadigics should give the company an advantage over competitors in the form of a 6-inch wafer production process that ought to enable it to reduce production costs by manufacturing in larger volumes than is typical with VCSELs.

Mattera and colleagues are anticipating a sharp rise in demand for VCSELs driven by both data communications and new applications in consumer electronics like gesture recognition. US companies Lumentum and Finisar are among those also targeting the sector.

Another key application area could appear in the emerging market for autonomous technologies. Denso, a key supplier to the automotive industry, has just made a strategic investment in the Sandia National Laboratories spin-out firm TriLumina. It has developed high-power VCSEL arrays aimed at lidar equipment used for driver assistance and autonomous vehicle navigation, and also attracted investment from construction and transportation equipment giant Caterpillar recently.