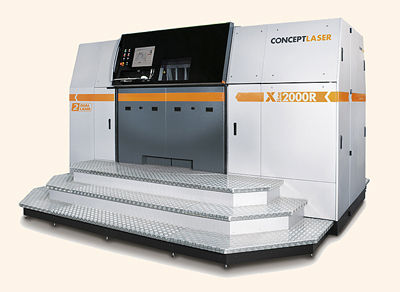 Aircraft manufacturer Airbus is to integrate a range of metallic parts made using laser additive manufacturing (AM) techniques. Airbus supplier and subsidiary Premium Aerotec has announced it is starting the series production of 3D-printed metal components at its Varel site (Friesland, Germany) following a major factory upgrade.

To meet the demands of the contract, Airbus subsidiary Premium Aerotec has constructed a brand new production hall for the additive manufacturing of titanium parts in Varel. At the same time, the company concluded a cooperation agreement with 3D printing systems developer Concept Laser, as the premium supplier of the machinery and plant technology.

The industrial series production is gathering pace, says Concept laser. With its investment, Premium Aerotec is following the development plans of Airbus. According to Peter Sander, Airbus’s Head of Emerging Technologies & Concepts, the aircraft manufacturer is planning to print one tonne of metal powder a month by 2018. Accordingly, the company says that AM production and AM processes “should be consistently promoted and expanded through to 2018”. 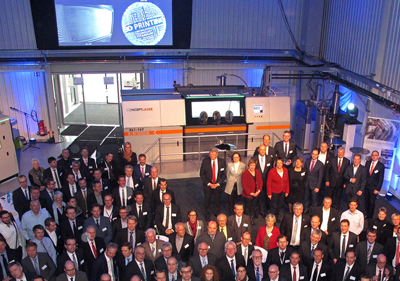 Premium Aerotec’s new production hall for 3D metal printing commenced operations in January. The opening ceremony was attended by 250 employees and guests, including Brigitte Zypries, Parliamentary Secretary of State at Germany’s Federal Ministry for Economic Affairs, who is also aerospace coordinator for the German Government.

The event marked the start of the industrial series production of a double-walled pipe elbow in the fuel system of the A400M transport aircraft, for example. These complex parts were previously produced from individual cast parts, which were then welded together to form a single assembly.

In the hall in Varel, two M2 cusing Multilaser machines and one X line 1000R machine from Concept Laser are producing 3D parts by Concept’s LaserCUSING process. Gerd Weber, site manager in Varel, said. “By the middle of 2016, another X line 2000R will be added. It features what is currently the world’s largest build envelope (800 x 400 x 500 mm3) in the field of powder-bed-based laser melting and is also equipped with 2 x 1kW lasers.”

Frank Herzog, CEO & President of Concept Laser, said, “The fact that we have been chosen as lead supplier to Premium Aerotec demonstrates that we are on the right path. For the aviation industry, additive manufacturing methods present both an opportunity and a challenge. This is because additive manufacturing technology produces entirely new components and also creates new supply chains." 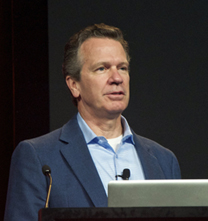 In February, at the 3D Printing panel discussion, held as part of the Photonics West conference and exhibition in San Fancisco, laser printing companies, academics and sector analysts were asked whether whether 3D printing would 'rock our world'?.

John Murray, a US VP from Concept Laser gave an emphatic yes in reply to the question, adding that the company had already sold 575 substantial laser 3D printing systems worldwide, most in Europe but 87 in the USA, so far.

As an American, representing a German company on his own turf, Murray had some frank advice for the international audience: “Europe is five years ahead of the US in terms of developing and installing this technology.”

Murray described Concept Laser’s range of four basic types of manufacturing systems, costing between $200,000 and $2 million each. Besides the medical sectors (Concept’s biggest market), aerospace and space clients constitute growing markets. “The aerospace sector is really impressive. I’m amazed at how much effort they’re making to use 3DP for rocket motor components.”