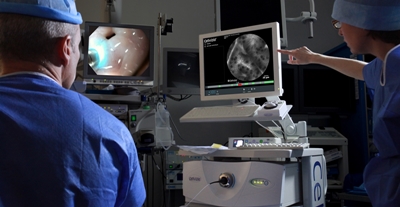 Mauna Kea Technologies, the Paris-listed developer of “optical biopsy” equipment based on laser endomicroscopy, has reported a net loss of €12.6 million on full-year sales of just under €10 million in 2015.

However, with operating expenses down after the company slimmed its workforce by a quarter to 91 people, founder and CEO Sacha Loiseau said that a new strategic plan based on partnerships with large medical equipment firms was starting to show results.

“Our partnerships with Cook Medical, Siemens and Fujifilm are concrete illustrations that our vision for Mauna Kea is becoming a reality, and the recent launch of [optical biopsy platform] Cellvizio by Cook Medical at the European Association of Urology Congress demonstrates the commercial leverage inherent to our new strategy,” said Loiseau in a statement accompanying the latest financial results.

Cash burn down
Those figures showed that Mauna Kea is burning through cash more slowly than in previous years. In the second half of 2015, the company said it used up €3.8 million – down from €5 million in the prior year. As of December 31, cash reserves stood at €10.6 million.

The reduced expenses largely relate to the shut-down of Mauna Kea’s direct sales and marketing operations in Germany, as well as staff reductions in its corporate marketing, clinical affairs department, and US sales operations.

Loiseau says that implementing the company’s “Vision 2020” strategic plan will ensure that Mauna Kea becomes a leading player in what he calls the “digital transformation of medicine and surgery”.

He added: “After successfully bringing microscopes into the patient’s body, we are now on the verge of bringing in vivo the connected laboratory of the future, harnessing the full power of the latest artificial intelligence techniques now available in the cloud, and the advent of next-generation molecular markers.”

Partnerships
Crucial to securing the company’s future are deals such as that with FujiFilm China, which was extended last month. Capitalizing on recent clearance of the Cellvizio 100 series by Chinese clinical authorities, FujiFilm China is set to launch the platform for bilio-pancreatic applications, where the optical technique works in tandem with ultrasound equipment.

That followed the December 2015 agreement with US-based Cook Medical, which will focus on urology applications. Under the terms of the agreement, Cook launched a private-labeled version of the Cellvizio platform at the European Association of Urology Congress held in Munich, Germany, earlier this month.

“With their international expertise in sales, marketing and medical education and their comprehensive complementary product portfolio in urology, Cook has the potential to rapidly maximize the commercial opportunities for Cellvizio,” Mauna Kea said after signing the deal.

Urological applications of confocal laser endomicroscopy with Cellvizio could include detection and surveillance for cancer recurrence among more than half a million people living with bladder cancer in the US, as well as the characterization of upper urinary tract urothelial cancer.

New clinical study
The Cellvizio technology is also set to feature in a new 200-patient clinical study in France that will focus on the characterization of pancreatic cysts.

CEO Loiseau says that the conclusions of the “milestone trial” will address key clinical questions relating to the management of patients with pancreatic cysts, and should reduce significantly the number of unnecessary repeat procedures and surgeries faced by patients whose results are inconclusive.

Mauna Kea says that Cellvizio offers "near-100 per cent" specificity for the characterization of such cysts, where the challenge is to identify the minority that are more likely to turn malignant, while limiting unnecessary surgeries for those that are at much lower risk.

“We look forward to the day when no patient with asymptomatic benign pancreatic cysts will undergo unnecessary surgery, as it is the case today for 40 per cent of them”, Loiseau added.