As the giant optical comms expo, OFC, wraps up in Anaheim, CA, optics.org reviews some of the new silicon photonics developments. 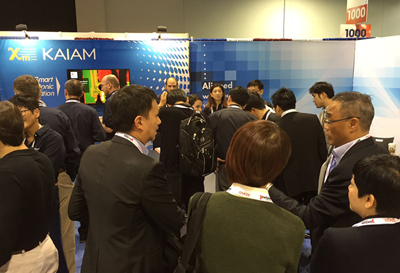 This week, OFC, the largest global conference and exhibition for optical communications and networking professionals, now 40 years old, has taken over the convention center in Anaheim, California. The setting is just a few hops from Disneyland, which itself turned 60 last year. As ever, OFC has drawn thousands of attendees from all corners of the globe to discuss and learn about the latest in optical communications.

In 2016, it seems, many silicon photonics developments and real products have been making their debuts at the show. So optics.org has taken a closer look at some of these launches; silicon photonics is considered by many industry analysts to be a disruptive technology-in-waiting.

Kaiam, a developer of hybrid photonic integrated circuit technology, is demonstrating what it is calling “the world’s first” 100Gb/s CWDM4 silicon photonics transceiver. To showcase the capability of the transceiver, Kaiam conducted a live demonstration, in which the module is connected to a standard directly-modulated laser version of the company’s own CWDM4 transceivers through 10km of single mode fiber. 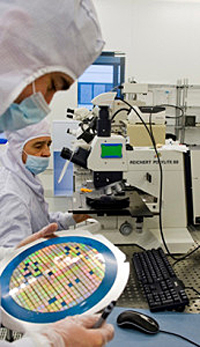 Dr. Ron Kaneshiro, VP Engineering at Kaiam, said, “Data center operators are continually looking for performance and cost improvements as many of them transition to WDM interfaces. This silicon photonics transceiver highlights that Kaiam has the tools available to deliver products in volume to meet and exceed our customers’ demands."

Stéphane Bernabé, project manager, said, “These results were jointly obtained by STMicroelectronics and Leti in the frame of the IRT Nanoelec cooperation. Fabricating the laser directly on silicon demonstrates IRT Nanoelec’s capability in III/V-on-silicon integration to achieve such high-data-rate fiber-optic module. IRT Nanoelec and its partners on this project, Leti, STMicroelectronics, Samtec and Mentor Graphics, are paving the way to integrating this technology in next-generation transceivers for optical data links.”

To achieve these results, silicon photonics circuits integrating the modulator were processed first on a 200mm SOI wafer, although 300mm wafers also could be used in the near future, the developers say. Then, a 2in (50mm) wafer of III-V material was directly bonded on the wafer. In the third step, the hybrid wafer was processed using conventional semiconductor and/or MEMS process steps to produce an integrated modulator-and-laser transmitter.

imec said it has improved the operating speed of the silicon based traveling-wave Mach-Zehnder modulators and ring modulators by process and design optimizations, to achieve 50Gb/s NRZ lane rates. In addition, a C-band GeSi electro-absorption modulator was developed with electro-optical bandwidth beyond 50GHz, enabling NRZ modulation at 56Gb/s and beyond. All modulator types can be driven with competitive drive voltages of 2Vpp or below, enabling compatibility with power efficient CMOS driver circuits. 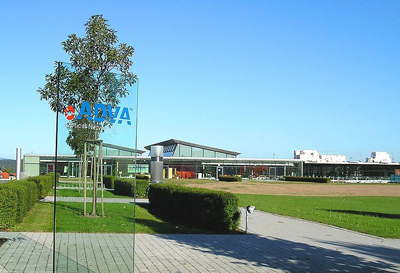 Jörg-Peter Elbers, VP, advanced technology at Adva, said, “The SPEED project is about collaboration, combining the expertise and passion of a leading multi-disciplinary engineering team to realize a shared vision – that high-bit-rate optical transceivers in the future should be as easy to manufacture and handle as electronic ICs today. In SPEED, manufacturability, testability and low-cost packaging are top priorities. Leveraging a CMOS-compatible ePIC approach, the potential to drive innovation and improve time to market is immense and opens a clear path towards more vertical integration in our products."

The SPEED project, which is funded by Germany's Federal Ministry of Education and Research (BMBF), began in November 2015 and is set to run for three years. Project partners include AEMtec, Finetech, Fraunhofer HHI and IZM, Innovations for High Performance Microelectronics (IHP), Paderborn University, Ranovus, Sicoya, TU Berlin, and Vertilas.

Mellanox Technologies, a supplier of end-to-end, intelligent interconnect solutions for data center servers and storage systems also demonstrated 50Gb/s silicon photonics optical modulators and detectors at OFC. The devices are the key component in 200Gb/s and 400Gb/s LinkX cables and transceivers. The company said the demonstration was an important milestone toward providing end-to-end solutions for HDR 200Gb/s InfiniBand and Ethernet interconnect infrastructure.

Dale Murray, principal analyst at LightCounting Market Research, said, “The transition from 40G to 100G networks inside the data center has begun in earnest. This announcement comes just as the cloud and hyperscalers are planning their migration to 200G and 400G." 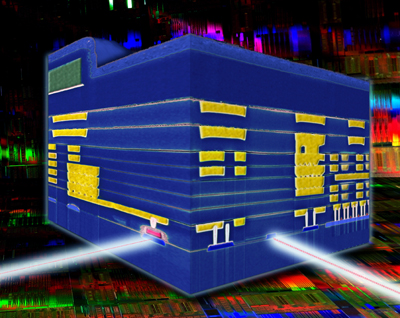 Computing and telecommunications industries have ambitious plans for the future, stated OFC exhibitor and presenter IBM research: systems that will store information in the cloud, analyze enormous amounts of data, and think more like a brain than a standard computer.

Such systems are already being developed, and scientists at IBM Research have demonstrated what they say could be “an important step toward commercializing this next generation of computing technology”. They have established a method to integrate silicon photonic chips with the processor in the same package, avoiding the need for transceiver assemblies.

The new technique, presented on March 25 at OFC, should lower the cost and increase the performance, energy efficiency and size of future data centers, supercomputers and cloud systems, the company claimed, adding: “To optimally benefit from this technology, a tight integration of the electrical logic and optical transmission functions is required. The optical chip needs to be as close to the electrical chip as possible to minimize the distance of electrical connection between them. This can only be accomplished if they are packaged together."

Bert Offrein, manager of the photonics group at IBM Research, Zurich, said, "IBM has been a pioneer in the area of CMOS integrated silicon photonics for more than 12 years, a technology that integrates functions for optical communications on a silicon chip. In addition to the silicon technology advancements at the chip-level, novel system-level integration concepts are also required to fully profit from the new capabilities silicon photonics will bring."