Laser projection takes its place in the spotlight

Technology advances, acquisitions, and bulk applications have made the sector a focus of activity, says Barco's Bill Beck. 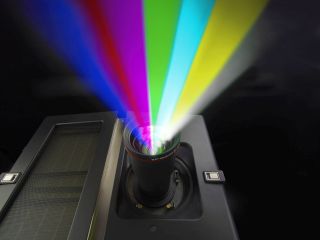 Laser-illuminated projection was first mooted as a new technology in the late 1990s, when the concept seemed at least impractical, if not downright far-fetched. But times have changed.

In 2016, laser projection is shaping up to be a disruptive force in the high-end cinema sector, as well as impacting the substantial market for smaller corporate and business-level projection systems. Eventually, all categories of performance projection will be affected.

"Laser projectors have gone from being considered almost insane, to possibly becoming the only light source for new cinema projectors by 2018," commented Bill Beck, now of Barco, but whose broad experience with the technology across the sector has led to a job title that officially reads simply "The Laser Guy."

Light farms
One prominent reason for the current momentum is progress in the core light-generation technologies at the heart of laser projection.

For a large-scale laser cinema system, the simplest and most intuitive approach involves using red, green and blue lasers to directly produce each of the color primaries required for a projected image.

This kind of platform, potentially the best way to address super-high brightness large-screen applications, has now developed to the point where IMAX feels able to convert its existing lamp-based 70-mm screen systems over to dual laser projection units delivering enough laser power to light 120-foot screens The lasers involved are relatively customized and market volumes are comparatively low, but the large venues and appropriate ticket prices of IMAX screenings allow the economics to balance out.

The four suppliers to high-end, standards-driven cinema installations—Barco, Christie Digital, IMAX and Dolby—use differing approaches to get the job done. Barco employs a direct-coupled architecture of its own proprietary design, which does without optical fibers or fiber coupling within the projector, avoiding potential coupling losses and boosting the lumens-per-watt efficiency.

"Everyone else currently doing RGB laser projection for cinema uses rack-mounted, fiber-coupled modular light engines, essentially the same architecture developed by Laser Light Engines," commented Beck, formerly of LLE, and who outlined that company's technology to Optics.org back in 2010.

A fiber-coupled approach leads conceptually towards one intriguing future scenario, where optical fibers and suitable switching arrangements allow racks of RGB sources to feed multiple projectors—such as perhaps several projectors in a theme park, a concept which led a leading theme park developer's CTO to coin the term "light farm" for the concept. Other light farm applications outside the entertainment sector could also prove attractive. 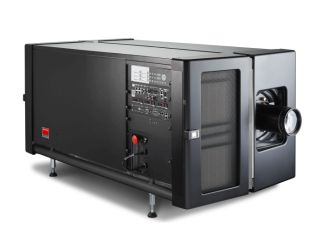 "The light engine étendue—a key parameter relating to the spread of the light in both area and angle—is crucial to this kind of fiber-delivery system, and depends on good beam quality," noted Beck.

"The trend across laser projection will be to move from multiple low power lasers producing average beam quality, to fewer high-power sources with excellent beam quality, delivering perhaps 50 to 100 W per beam line. These are the kind of beams that can then be switched and distributed for use in a light farm architecture."

Speckle mitigation
Meanwhile, the twin headaches of speckle and overly dim cinema projection for 3D images, both mentioned by Beck in 2010 as significant potential hurdles, are still on developers' minds.

Image brightness for 3D has lately been improved by physically throwing more light onto the screen, through the development of 6P (for "six primaries") projection, in which two sets of red, green and blue primaries, separated by a few nanometers, are projected. One RGB set is delivered to each eye, through efficient optical filtering by the viewer's 3D glasses.

Speckle still remains a complicated topic, with each manufacturer of commercial RGB laser engines doing as much as they can to mitigate its impact. Some solutions, such as physically shaking or vibrating the screen itself to camouflage the effect, can be distinctly blunt.

The green primary is particularly challenging for speckle, being typically generated via second harmonic generation (SHG) from another wavelength, a process which produces a relatively narrow-band output. "The ultimate driver causing residual speckle is narrow spectral bandwidth," noted Beck. "So one mitigation strategy would be to use multiple wavelengths to carefully broaden the spectral power distribution—a secondary benefit of a 6P 3D architecture."

At the same time, development of green diodes suitable for direct use without SHG has advanced to the point of early commercialization, but to date at relatively low output power levels. Diodes able to cover a range of center wavelengths with at least 1-2 nm FWHM bandwidths could be integrated to 'fill in' a wider spectral bandwidth, a fact likely to drive their adoption; but in the long term the need will be for both bandwidth and higher power per device or beam line.

Growing projection markets
Away from high-end cinema applications, a large mid-range sector of projection in business and professional contexts is currently embracing laser-based systems as an attractive alternative to lamps. In particular, an approach called laser phosphor—or LP—is now having a dramatic impact.

More fully described as (blue) laser (pumped) phosphor, LP involves using a blue laser directly as the source of the blue primary, while also employing it to pump a broad-band output "yellow" phosphor and generate raw yellow-white light, which includes substantial red and green bands. The required red and green illumination is then filtered out for use, the yellow being blocked and wasted.

Illumination levels of 1,000 to 20,000 lumens are currently achievable this way, and the approach appeals to end-users by removing the need for regular lamp replacement while providing much higher electrical efficiency.

"The LP process is less efficient overall, since you are not directly generating the wavelengths that you really want; but it starts with a very low-cost blue source and essentially puts it through a lumen multiplier," commented Beck. "Laser-pumped phosphor has emerged as a compromise between lower maximum brightness and source lifetime, in exchange for lower initial cost."

Compromise or not, over half a million units could be supplied into the sector this year, with around ten suppliers now involved. One drawback involves increased source étendue, since LP sacrifices the ultra-small étendue of a collimated laser beam. But the appeal of lower acquisition costs compared to RGB lasers, no lamp changes and reduced power consumption makes LP highly likely to displace Ultra-High-Performance (UHP) mercury arc lamps from their remaining projector applications in a fairly short space of time. 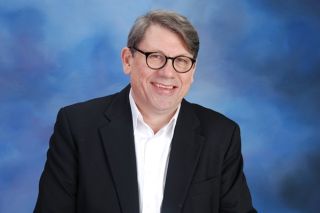 Business moves
Between all potential sectors, the total market for laser projection systems could be as high as eight to ten million units per year—reason enough for the recent business maneuvers within the sector, such as the ones being talked about at Photonics West.

IPG Photonics, the fiber-laser specialist with existing market-leader status in several materials processing and machining niches, has announced an intention to engage with the cinema projection sector along with the imminent release of its six-primary laser light engine.

The company's fiber-laser expertise is built around a versatile platform technology, capable of generating different laser parameters to suit different applications, and which can produce several kW from a single fiber—excellent from an étendue standpoint.

It remains to be seen how IPG's technology will fit into the middle-range 5,000-lumen projector segment, where the substantial market now lies; but the company's advantages of scale and pricing have so far enabled it to engage very successfully with the markets it has chosen to approach.

Necsel's acquisition of PD-LD and its volume Bragg grating (VBG) technology for generation of separate wavelengths from a primary laser source was another headline from San Francisco. In this case, the move is likely a recognition by Necsel's parent—and major bulb supplier—Ushio of the fundamental move towards laser-projection by customers who don't like the idea of having to change bulbs in the first place.

"PD-LD's volume Bragg gratings might be useful in some Necsel devices, so the deal makes sense," noted Beck. "In my view, the trend is strongly towards more watts per beam-line and less hardware infrastructure, which means that frequency-doubling of a low power device may simply not be the best technology to use long-term. But Ushio is building a portfolio of specialty laser and optics companies that would support them making a long term transition from lamp to solid-state illumination—something all owners of lamp suppliers are going to have to come to terms with."