Based on the scale of exhibits and attendance, the optical communications sector is on the up. 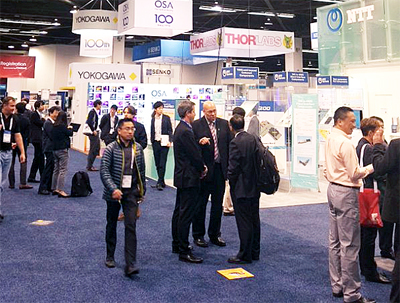 The organizers of OFC 2016, which has just closed its doors in Anaheim, Ca, lauded this year’s expo as “the most comprehensive international event for both the science and business of optical communications, so far.” The event hosted more than 560 exhibiting companies from 65 countries and more than 1,100 technical and business presentations. Here, optics.org reviews a selection of interesting new developments that were on show.

Infinera has introduced the Infinite Capacity Engine (ICE), a multi-terabit optical subsystem enabling a step function in optical wave division multiplexing performance. The ICE is said to be the first optical subsystem in the industry to offer network operators the combined benefits of delivering optical super-channel capacity up to 2.4 Tb/s and reach up to 12,000 km in a single small package.

The ICE will be integrated into Infinera Intelligent Transport Network platforms customized for long-haul terrestrial, subsea, metro and data center interconnect networks to provide a comprehensive set of solutions to customers.

Dr. Dave Welch, Infinera Co-founder and President, said, “The ICE ushers in a new era in optical transport networking and is the foundation for network operators to rapidly respond to massive bandwidth demands. It serves as the fundamental building block for the Infinera Intelligent Transport Network portfolio and we plan to introduce customized engines designed for various network applications, far exceeding comparable industry implementations in performance."

Don McAuley, VP Products at Interoute, commented, “Infinera's advanced network technology helps us deliver services faster, and eliminate unnecessary cost and complexity so we can continue to stay ahead of our competitors and deliver value to our customers. The integration of highly advanced photonics and electronics in optical systems, increases network scalability, power efficiency and agility." 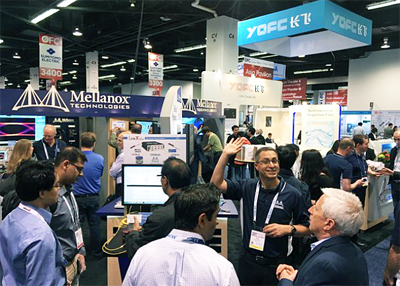 Mellanox pulled in the punters.

In support of the emerging SiP ecosystem, NeoPhotonics has introduced a range of high power, uncooled lasers and laser array sources for both the 1310nm and 1550nm wavelength bands. These lasers support power from 40-60 mW over a wide temperature range.

Mehdi Asghari, VP silicon photonics at Mellanox Technologies, said, “We are pleased that NeoPhotonics has opened its laser technology to this ecosystem. Several key laser integration and performance features have enabled us to support our customers with a solid and growing portfolio of high performance LinkX 100G modules and cables.” 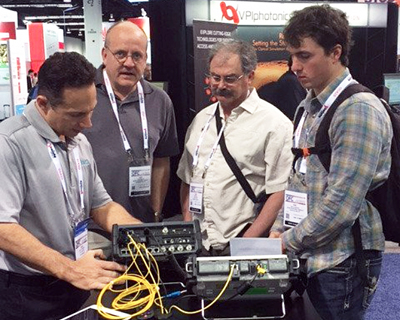 The MP1800A conducts functional and tolerance testing to show the performance of optical transceivers. InnoLight selected the Anritsu MP1800A for the demonstration because its BERT can create high-quality eye diagrams and its ability to add different forms of jitter, including SJ/RJ/BUJ/SSC, to perform tolerance tests on the modules.

Osa Mok, CMO at InnoLight, said, “As we move from 100G to 400G in data center optics, advanced high-speed test equipment is essential for us to deliver 100G/400G optical transceivers.” Hiroshi Goto, Business Development Manager, Anritsu Company “The MP1800A has become the test instrument of choice for many companies developing high-speed devices used in next-generation networks because of its ability to produce extremely clean eye diagrams and conduct highly accurate jitter tests.”

Zeetta Networks, a developer of open networking solutions for heterogeneous networks, announced that it has integrated its OpenFlow 1.4 control interface onto Polatis’ Series 7000 – 384x384 port Optical Circuit Switch (OCS) products. The Polatis Series 7000n Optical Switch is the largest-capacity, highest-density, non-blocking all-optical matrix switch available in the industry today. The 384x384 OCS only has the energy consumption of a light bulb, but can route over 3.7Pb/s of optical traffic, with up to 9.6Tb/s capacity per fiber. 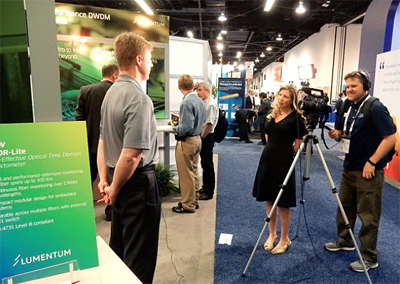 The FTBx-88200NGE Power Blazer module offers integrated CFP4 and QSFP+/QSFP28 interfaces in alignment with next-generation 100G network deployment, along with an SFP+ port. The module offers a full suite of advanced test functionalities to speed up product development and verification, including multistage ODU multiplexing, multichannel OTN and advanced troubleshooting capabilities.

“Over the past few years, EXFO has provided test solutions to network solution vendors, starting with the industry’s first 100GE/OTU4 tester,” said Claudio Mazzuca, EXFO’s Vice-President, Transport and Service Assurance Division. “As the industry moves into the mass deployment stage for 100G and prepares for 400G as the next step, it is clear that NSVs are facing new challenges and need to be more agile and cost effective in their development cycles. With our new solutions, EXFO is positioned to partner with our NSV customers and deliver a truly flexible test infrastructure.” 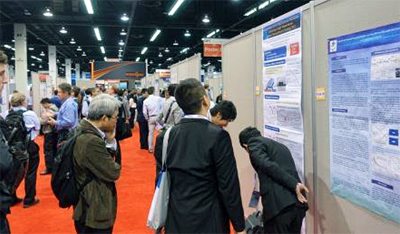 WIN’s flexible epitaxial growth and optical device manufacturing will accommodate indium phosphide substrates from two-inch to four-inch diameter. Epitaxial growth/characterization services for lasers and photo diodes are now in place, and installation/development of a complete optical device fabrication line is underway and scheduled for full release by Q4 2016.