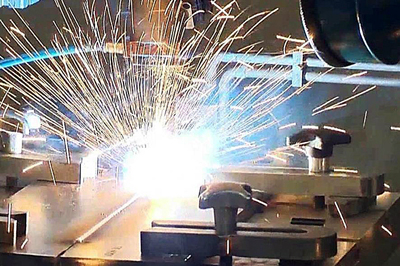 Global sales of laser systems for materials processing increased by 10% in 2015 compared with 2014 figures and measured in local currencies, according to the annual market survey conducted by Optech Consulting, based in Taegerwilen, Switzerland.

But when valued in US dollars, any increase was “wiped out completely”, due to shifts in exchange rates, with total market volume steady at $10.8 billion, on a level with that of 2014. Conversely, when valued in (now weaker) euros, the market seemed to increase by 20% to €10.7 billion, up from €8.7 billion in 2014.

Market growth rates in local currencies of 10% and above were recorded for Europe, North America, Japan, and Korea. Sales in China increased by nearly 5%, with weakening demand towards the end of the year. Due to the shift of currency exchange rates, China surpassed Europe as the world's largest consumer of industrial laser systems for the first time, in spite of the comparably low growth rate of the Chinese market. 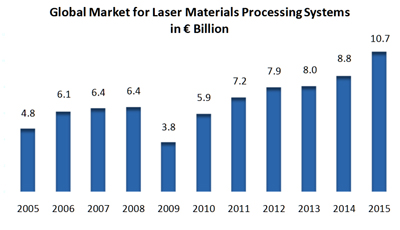 Arnold Mayer, director of Optech Consulting, commented, “Within Europe, the recently much-battered markets in Spain and France led market growth, followed by Italy and the UK. Germany, which led growth in Europe in the recent years, accounted for a low single-digit increase. Demand in Eastern Europe was mixed, with a strong increase seen in the Czech Republic, but weaker market trends for Poland and Hungary.”

Asked for further detail on the prospects for the important Chinese market, Mayer said, "The 2015 sales volume for laser materials processing systems in China was $3.1 billion, up from $ 3.0 billion in 2014. In a steady economic environment I would have expected growth to continue at double-digit rates in the medium term. However, due to the reduced growth forecasts for the Chinese economy I now expect the laser systems market to decrease in 2016." 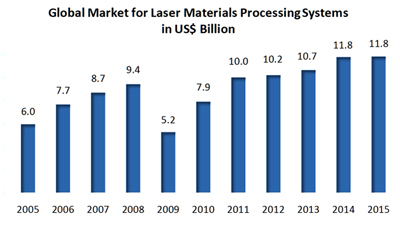 He added, "Depending on the macroeconomic development in China during the rest of 2016 the laser system market may trend sideward or shrink by more than 10%. The demand for laser systems in China is supported by the 3C industry (computing, communication and consumer electronics), which exports a large share of its products."

According to the report, high power laser systems for cutting, welding and surface treatment account for a 45% share of the market. Laser systems for microelectronics processing make up for a “good 20% share”. Mayer added, “These systems are used in the manufacturing of a wide range of products, including semiconductors, flat panel displays, printed circuit boards, solar cells, fiber-optic components, and microfluidic devices.” 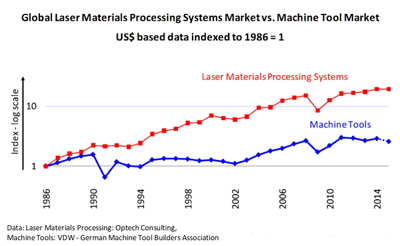 The majority of the laser materials processing systems are used in machine tool applications such as cutting, drilling and marking. Hence, the machine tool market can be used as a benchmark for comparing sales of industrial laser systems. In 2015, the global machine tool market increased by 7%, measured in euros, corresponding to a decrease by 11% in US dollars, according to a preliminary analysis of the German Machine Tool Builders Association (VDW).

At the same time, the market for industrial laser systems increased by 20%, when valued in euros, corresponding to flat growth in US dollars. Also for the preceding three years, sales of laser systems grew more strongly than did the machine tool market, indicating that laser processes had gained ground.