Said to be the world's first such facility, the factory will be located in the South Korean city of Gumi. 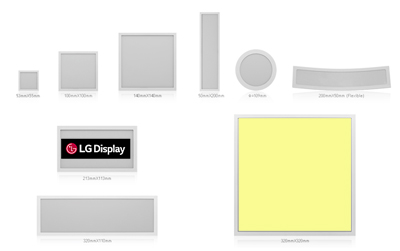 LG Display, headquartered in Seoul, Korea, has announced that it is to invest substantially in a new OLED light panel manufacturing facility in its home country.

The planned facility will be the first 5th generation (1000 x 1200mm) OLED light panel manufacturing plant in the world, to be located in the South Korean city of Gumi, where it will produce a range of OLED light panels. The initial input capacity at the plant will be 15,000 glass substrates per month. The company added that the monthly input capacity could be gradually “ramped up” – depending on the market situation.

LG Display expects the increased production with the new facility to give the company economies-of-scale, leading to “significant price competitiveness”. In addition, the accumulated OLED display technical know-how should allow LG Display to considerably enhance its OLED light product quality.

The fifth generation facility will give the company panel size flexibility: with the larger glass substrate, the company says it will be able to produce a wide range of different size light panels, including “giant ones”. Furthermore, this ability to make giant panels will better enable the company to penetrate the general lighting market.

This latest investment decision follows the acquisition by LG Display of the OLED light business of its sister company, LG Chem in December, 2015. Last November, LG Display said it would spend as much as $10 billion building another OLED manufacturing facility, although that one will be dedicated to display, rather than lighting, applications.

LG Display’s vision is to bringing new OLED technology to its customers around the world in “the broadest array of applications”. The company will firstly focus on task lighting and decorative lighting in high-end retail stores and in luxury hospitality; and expand to the general lighting market going forward. Also, the company will focus on automotive and convergence applications such as OLED light panels merged with furniture, architectural materials and electronic devices.

LG’s OLED light experience began in 2000 with R&D into OLED materials at the Group’s chemicals affiliate, LG Chem, with production of OLED light panels beginning in 2012. The acquisition last year of the OLED light panel manufacturing business by LG Display has been creating synergies with its production infrastructure and technology in OLED displays. The company added that, according to market research company UBI Research, the OLED light market is expected to grow rapidly from US$ 135 million in 2016 to US$ 1.6 billion in 2020.