Entrepreneur who guided Jenoptik during post-unification Germany dies at the age of 78. 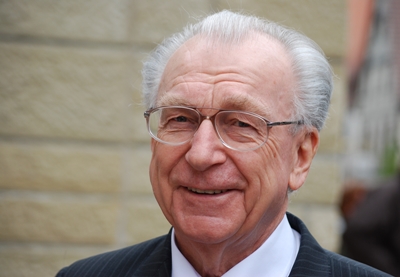 Lothar Späth, a key figure in the emergence of major optics company Jenoptik in the aftermath of German reunification, has died.

Headquartered in Jena, inside the former East Germany, Jenoptik was initially spun out of VEB Carl Zeiss Jena. Späth became the optics firm’s managing director in June 1991, and remained at the helm for the following 12 years, before becoming chairman of the company’s board of directors.

In a Jenoptik statement, Späth's successor and current CEO Michael Mertin said: “Lothar Späth was both an important politician and entrepreneur. We have now lost a person who created and changed a great deal with his vision, courage, and ability – and not just at Jenoptik. We are mourning the death of Lothar Späth, who set our company on its course to success.”

Guiding role
Having guided Jenoptik through the tumultuous years in the immediate aftermath of the demolition of the Berlin Wall, Späth then oversaw the company’s stock-market flotation – the first for any high-tech enterprises based in the former East Germany.

Matthias Wierlacher, the current chairman of the Jenoptik supervisory board, said: “Lothar Späth built up Jenoptik with his exceptional combination of strategic persistence, pragmatic imagination, and an understanding of others. And he was able to leave his mark on an entire region in the context of the post-reunification situation. We will honor his memory with great admiration and appreciation.”

While Jenoptik is perhaps now taken for granted as one of the key players in the global optics and photonics sector, with offices all over Germany, Europe, Asia and the Americas, Mertin hailed Späth’s key role in converting the local expertise in optics technology around Jena into tangible economic benefits.

“It was his initiative that made it possible for Jenoptik to survive and to develop into the successful global player that it is today,” he said, crediting Späth with transforming this segment of the old East German industrial sector into a success in post-reunification Germany alongside related companies such as Zeiss and Schott.

Jenoptik added: “He made acquisitions, some of which form part of the core of Jenoptik today and, in doing so, opened up new markets for the city of Jena’s vast optical competence, fashioning it into a new ‘Optical Valley’.”

‘Economic trailblazer’
A high-ranking politician in the old West Germany before taking up the reins at Jenoptik, Späth is also regarded as having a major influence on the development of the city of Jena more widely throughout the changes of the 1990s.

His key decisions included rapid transformation of a former industrial complex in central Jena, the creation of a meeting place for international investors, and the incorporation of start-up enterprises that helped build up Jenoptik through its DEWB AG holding company.

“Lothar Späth was not only an economic trailblazer but also a leader in terms of social involvement, establishing cultural and social endeavors as an integral part of the Jenoptik company culture,” the company said. “He invited American artist Frank Stella to exhibit his work outside Jenoptik headquarters, initiated the Jenoptik art collection, and launched the company’s own “tangente” exhibition series in Jena. Building on his reputation and driven by his innovative spirit, Lothar Späth was able to open new doors not only for Jenoptik but for the region as a whole.”

• Jenoptik has also confirmed that 2015 represented the strongest fiscal year in the company’s 25-year history, with sales rising 13 per cent on the 2014 figure to €669 million, and group earnings before interest and taxes rising 19 per cent to €61.2 million.

With net debt down significantly and orders looking solid, CEO Mertin and his team are predicting steadier sales growth this year to around €690 million and have also proposed to increase the company’s shareholder dividend pay-out – despite ongoing worries over the wider global economy.

“A solid order and project pipeline will allow us to maintain our course, even in a challenging environment,” said Mertin, who has targeted annual company revenues of €800 million by 2018. “Our new divisional structure means we can focus better on growth markets that serve global megatrends and are thus well on our way to becoming a global player.”