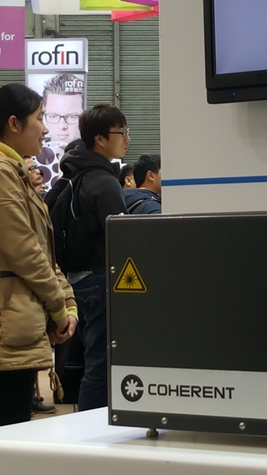 Californian laser giant Coherent is set to acquire industrial laser company Rofin-Sinar, after the boards of both firms agreed a $942 million deal.

News of the agreement, which would see Coherent make a significant move into the industrial laser sector, prompted Rofin to postpone the annual shareholder meeting that had been scheduled for March 17, and at which its existing board faced a challenge from activist investor SilverArrow.

At $32.50 per share, the acquisition price agreed by the two companies represented more than a 40 per cent premium on Rofin’s prior stock price – which rose accordingly after the deal was revealed - and the highest valuation since late 2011.

Coherent CEO John Ambroseo said in a joint statement: "The combination of Coherent and Rofin represents a unique opportunity to strengthen Coherent's position in materials processing."

Revenue diversification
While Rofin has always been much more focused on lasers for materials processing than the far more diversified Coherent, both companies have been working hard to develop high-power fiber lasers as the industrial sector moves away from carbon dioxide sources to adopt solid-state technology.

Together, they are likely to generate annual sales of around $1.3 billion, while the combined company will employ around 5000 staff before any headcount reductions take effect.

Alluding to the efforts to develop fiber lasers and mount a challenge to IPG Photonics, Rofin’s chairman Peter Wirth said: “[This combination] grows out of the successful technological and strategic transformation that Rofin has been undergoing…and the hard work of Rofin’s many talented professionals to execute our strategic plan."

In a joint presentation outlining the rationale behind the deal, Coherent highlighted the anticipated 16 per cent compound annual growth rate expected for the fiber laser sub-sector over the next few years, saying: “Coherent and Rofin will have a strong number-two position in the large and fast-growing fiber laser market.”

Rofin CEO Thomas Merk expanded on that, saying: "Coherent and Rofin are highly complementary both technologically and geographically. Our two companies share similar cultures and we are excited for our customers and employees to benefit from the greater resources and growth prospects that come from being part of a larger organization."