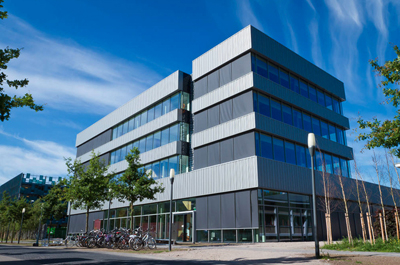 The Solliance Building was opened in 2014.

Research will be carried out at the Solliance pilot production facilities on the High Tech Campus in Eindhoven, Netherlands, and in the research facilities of imec, Leuven, Belgium.

Solliance works with and for the PV energy sector, both to fulfill short-term needs of industry, and to transfer promising lines of research. For its three principal themes – thin film silicon, copper indium gallium selenide (CIGS/CZTS) and organic/perovskite PV – the organisation says it is “working to answer to the industry’s most pressing questions”.

Huib van den Heuvel, director at Solliance, “We are extremely pleased with Panasonic’s decision to join our program. Panasonic strengthens the industrial participation in this exciting research field.” The agreement gives Panasonic access to the equipment and expertise suited to the development of its revolutionary Perovskite Solar Cell (PSC) technology on flexible substrates.

Panasonic will conduct the feasibility studies on the possibility of large scale roll-to-roll production of printed PSCs under this program. The partnership will create the industry's most technically capable and commercially focused effort to roll out this next generation technology.

“We very much appreciate the cooperation with Solliance. Its roll-to-roll pilot production infrastructure and the know-how related to PSCs is world class,” said Toshihiro Higuchi, Panasonic representative who is working within the joint research team at Solliance. Panasonic has been an industrial partner in several of imec’s research programs since 2004, notably in the “large area flexible electronics program” at Holst Centre since 2009, which focused on roll-to-roll production technologies.

Solliance is a partnership of R&D organizations from the Netherlands, Belgium and Germany working in thin film photovoltaic solar energy. In order to strengthen the EU region’s position as a world player in PV, Solliance is creating the required synergy by consolidating and coordinating the activities of 250 researchers in industry, at research institutes and universities. Solliance Research Partners are: ECN, imec, TNO, Holst Centre, TU/e, Forschungszentrum Jülich, University Hasselt and Delft University of Technology.

imec has also announced the opening of its new 300mm cleanroom. With this 4000m2 facility, imec’s semiconductor research cleanroom area now totals 12,000m2. The new facility will enable imec to keep its position as a nanoelectronics R&D center serving the entire semiconductor ecosystem.