But it looks like another flat year in 2016, predicts the analyst team at the organization representing semiconductor equipment suppliers. 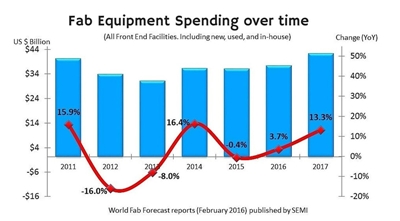 Next year should see a long-awaited return to strong growth for the semiconductor capital equipment market – a key sector for laser companies in particular.

That’s according to analysts at the Semiconductor Equipment and Materials International (SEMI) organization, which keeps a close track of fluctuating demand in the industry.

The latest SEMI world fab forecast predicts only a 3.7 per cent increase in spending on front-end fabrication facility equipment like lithography scanners this year, but more than 13 per cent growth in 2017 as chip makers prepare to ramp production of devices corresponding to the 10 nm “node”.

10nm “node” ramp
Equipment spending in 2015 totaled $35.9 million, down very slightly on the 2014 figure. This year the spending total is expected to rise to $37.2 billion, before double-digit growth in 2017 propels the market to $42.1 billion as 24 new facilities around the world install production equipment.

“The biggest contributors to the growth are foundries, 3D NAND fabs, and companies beginning to equip and prepare for the 10 nm ramp-up in 2017,” reckons SEMI.

“Dedicated foundries continue to represent the largest spending segment. [Their] spending for 2015 dropped slightly from $10.7 billion to $9.8 billion, but is expected to increase by 5 per cent in 2016 and almost 10 per cent in 2017.”

Spending on equipment for DRAM chip production ranks in second place, but after a strong 2015 this sub-sector will shrink by 23 per cent this year before bouncing back in 2017. That fluctuation is partly explained by an expectation that big-spending Samsung, the biggest player in terms of DRAM production, is set to cut its capital expenditure this year.

Consolidating supply chain
The semiconductor industry and its associated supply chain is currently in a period of consolidation – with record-breaking figures for mergers and acquisitions. That has already transmitted down to the level of laser companies, as evidenced by the planned acquisition of Spectra-Physics Lasers owner Newport by MKS Instruments, which provides a variety of equipment used by semiconductor manufacturers.

But 2017 will see a change as new technologies enabled by advances in lithography and other tools drive an increase in fab spending at the 24 new facilities either already under construction or where building is set to begin this year. SEMI notes that eight out of those 24 will be located in China.

Last month the industry organization reported that despite the generally flat market the book-to-bill ratio for North American manufacturers of semiconductor equipment had risen to 1.08 in January – the highest level seen since mid-2014.

At the time, SEMI CEO Denny McGuirk commented: "Recent semiconductor order activity is on [a] par with the figures reported one year ago. While uncertainty clouds the near-term economic outlook, we currently expect 2016 capex to remain in range of 2015 spending."