Activist investor accusation that Rofin covered up ‘embezzlement’ case in the UK is dismissed as desperate by the industrial laser firm in the run-up to a key shareholder vote. 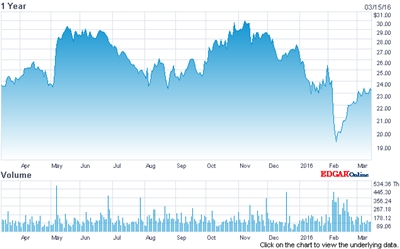 Industrial laser firm Rofin-Sinar and its activist investor SilverArrow Capital Advisors have exchanged what look to be their final missives ahead of a March 17 stockholder vote to elect company directors.

SilverArrow owns nearly 10 per cent of Rofin’s stock, and during the past few months has been engaged in a war of words with the company regarding the actions of key executives and corporate oversight.

UK embezzlement case
Ahead of this week’s annual stockholder meeting, where the make-up of the future Rofin board of directors will be decided, that war of words has escalated. SilverArrow said it discovered during its due diligence process that a former senior employee of the Rofin-Baasel subsidiary in the UK had embezzled £2.5 million during the 2015 fiscal year – and questioned the parent company’s decision not to disclose that information.

While Rofin disputes some of the SilverArrow claims, saying that its press release on the issue was "rife with factual errors" and "a desperate last-minute attempt to distract stockholders from the real issues", it also confirmed that it had reported the case to the UK authorities.

“Contrary to [SilverArrow’s] claims, Rofin reported the incident to law enforcement immediately after discovering the rogue employee's fraudulent actions and the accused individual was arrested the first working day after returning from vacation,” it said, rebutting the activist investor’s claim that the company had waited three months before pressing charges.

Rofin chairman Peter Wirth said in a company statement: “While we are of course disappointed by the egregious acts of one former employee, Rofin acted immediately to report the incident to, and has been co-operating closely with, all relevant legal authorities on this matter." *see update below

“Claims exaggerated”
“Rofin has been working in close collaboration with the [UK] Crown Prosecution Services as it assembles its criminal case against the accused individual,” added the laser firm. “Following this, Rofin will determine the appropriate next steps regarding civil lawsuits to seek remedy from all responsible parties and recover the full amount. SilverArrow's claim that Rofin waited three months before disclosure and pressing charges is entirely false and is a deceitful effort to mislead stockholders.”

Rofin also says that SilverArrow has exaggerated the total embezzled by the rogue employee by around 25 per cent, and that the amount of money involved was “immaterial” in the context of the company’s overall financial results.

“Rofin determined, after consultation with its audit committee, that the matter was immaterial and did not have to be publicly disclosed and its auditors issued an unqualified opinion as it relates to the effectiveness of the company's internal control over financial reporting as of September 30, 2015,” it said.

Stockholder vote
The various differences of opinion between Rofin and SilverArrow are set to come to a head later this week, when the laser company holds its annual meeting of stockholders.

For the past few weeks the two parties have been urging stockholders to vote for their preferred candidates on the future Rofin board of directors.

SilverArrow wants to see its three selected candidates – its own CEO Thomas Limberger, corporate governance expert Jordan Kovler and seasoned hotel executive Gebhard Rainer - elected to the board, in a bid to shake up what it describes as an “entrenched” set of executives incapable of restructuring a “disorganized and fragmented” company to meet the demands of today’s industrial laser sector.

On the other hand, Rofin says that Limberger and Kovler possess neither the experience nor qualities necessary to serve on the company’s board, although in the interests of making a compromise they are willing to accept Rainer’s nomination if he is elected.

* update (2pm March 15th): SilverArrow has disputed Rofin's claims regarding the time at which the "embezzlement" incident was reported to the UK authorities and the amount of money involved, stating:

"Northampton Police, the authority in the UK handling the investigation of the crime, informed SilverArrow's investigators that Rofin had uncovered the embezzlement in June 2015, but not reported it to the authorities until end of September 2015."

It continued: "Northampton Police informed SilverArrow's investigators, and reconfirmed, that the amount believed to be embezzled was £2.5 million."