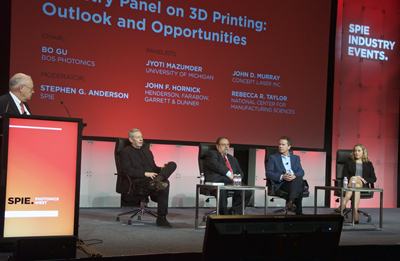 Whether you call it 3D-printing, additive manufacturing or, perhaps historically, rapid prototyping, a conference on this still-evolving method of making products as diverse as rocket parts and hip replacements will invariably attract a big crowd. So it was no surprise that last month’s Photonics West in San Francisco seemed to be holding such events morning, noon and night of ever day.

One of the best attended such forums, which ranged across academic, technical, business and legal aspects of 3D printing, was the Industry Panel on 3D Printing: Outlook and Opportunities, chaired by Bo Gu, of Bos Photonics and moderated by Stephen Anderson, Director, Industry Development, SPIE.

At the outset Stephen Anderson stated, “Market analysts have valued the global 3D printing market at $2.3 billion in 2013 and are projecting global revenues of $8.6 billionby 2020 — an impressive compound annual growth rate of more than 20%. And engineering giant Siemens has recently forecast that 3D printing will become 50% less expensive and 400% faster over the next five years.”

The flavor of this ambitious talk program, which was followed by an almost endless Q&A session from the hundreds of attendees, could be summarized by the title of the newly-published book by keynote speaker and lawyer John Hornick, pithily titled “3D Printing Will Rock the World”.

In the style of a motivational speaker, lawyer-turned-3D printing aficionado Hornick told the conference: “In all my career, I have never been involved as anything as exciting as 3D printing. So far in the history of manufacturing we have had four disruptive game-changers: fire, the wheel , the industrial revolution, and the digital age, and now we have the fifth, 3D printing. But, of course, it’s about a lot more than making you own Yoda heads at home.” 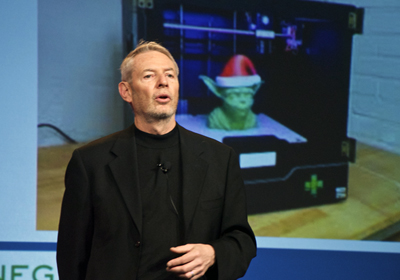 John Hornick, author of "3D Printing Will Rock Your World".

Hornick said this technology, which invariably depends on photonics-related systems – lasers, infrared sources and optics in various combinations – is leading to ever more sophisticated manufacturing systems typically ranging in cost from $5000 to $5 million.

“According to my research, there are now at least 80,000 3D printing machines installed worldwide. So 3D printing is causing the democratisation of manufacturing around the world, by its elimination of entry barriers.”

This, Hornick said, is dramatically changing the regional picture of manufacturing and blurring the lines between who is a manufacturer and who is a customer. “Its potential to replace and repair complex parts means that there should be less need for original manufacturing in certain cases,” he said, “which is causing business models to evolve. What could happen is that a lot of companies do not have to sell products – but instead they can sell designs.”

In his view, this possibility would have the downside that manufacturing jobs would be lost but on the upside: “So many more businesses will be created and new job will be created that we cannot even conceive of today.” He concluded, “Many people say that 3D printing is still is too slow for mass production but it’s not for that purpose – its strength is in mass-customization. So we will move from mass production to production by the masses.” 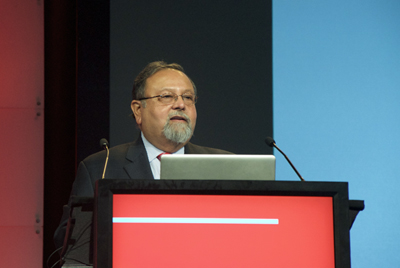 Prof. Jyoti Mazumder, Engineering Professor at the University of Michigan.

The next panel speaker was 3D printing veteran of 25 years Jyoti Mazumder, an Engineering Professor at the University of Michigan, who developed the “Art to Part” 3D metal printing process, which lets manufacturers make parts directly from drawings, has developed some of the most sophisticated mathematical models to describe how heat from lasers effects materials.

Prof. Mazumder also invented a process that allows manufacturers to “write with metal pixel by pixel,” he explained. “Direct metal deposition, as our technique is called, allows you to create 3D shapes directly from computer-aided design by adding materials instead of subtracting, which is the present practice.”

He said the avoidance of the need for retooling alone was economic justification for larger manufacturers to adopt 3D printing, with the potential saving in that respect of hundreds of millions of dollars per year.

His presentation went on to detail a wide range of other benefits of the techniques, such as: reduction in lead times for design, production and repair of products; the ease of manufacturing rare or lost parts by reverse engineering; in-field repair of complex parts; and the ability to ‘certify as you build’ in the field. Prof. Mazumder concluded, “3D printing will also lead to reductions in training costs, wastage of valuable raw materials and improved product quality overall.” 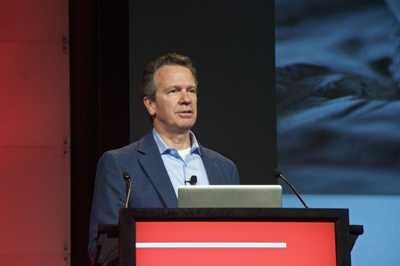 John Murray, a VP from Germany-based Concept Laser, one of the leading developers of manufacturing systems, said the company had already sold 575 substantial laser 3D printing systems world wide including 87 in the USA, most are deployed in Europe. An American, representing a German company, Murray had some frank advice for the audience: “Europe is five years ahead of the US in terms of developing and installing this technology.

"One of our largest customers is a medical company that has been using 3D-printed replacement medical parts, such as hip and knee implants, for at least five years in production. So they needed to qualify for FDA approval for this technique about nine years ago. I am always surprised when I visit with a new potential client and they say they are nor sure they are ready to start using 3D priting and I say to them – you realize you are about a decade behind the market leaders in this field. You are way behind, I say.”

He described Concept Laser’s range of four basic types of manufacturing systems , costing between $200,000 and $2 million each. Besides the medical sectors (Concept’s biggest market), aerospace and space clients constiute a growing market. “The space sector is really impressive,“ he said. “I’m amazed at how much effort they’re making to use 3DP for rocket motor components and so on.”

Turning to the green dividend, Murray contrasted traditional subtractive manufacturing processes, which produce a lot of waste material (such as aluminum or titanium), which has low value when sold on to a recycler, with additive manufacturing, “which creates very little waste material. Added to which, the design process is completely different. In a 3D printed part, there isn’t a molecule of material that isn’t working. But with the subtractive manufacturing approach you know there’s a lot of excess material that’s just along for the ride and consuming fuel.“ 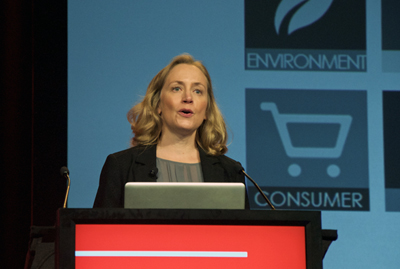 Rebecca Taylor, Senior VP at the US National Center for Manufacturing Sciences.

However, if you thought 3D printing was all positives, Rebecca Taylor, Senior VP for the US National Center for Manufacturing Sciences (NCMS), had a few other ideas in her talk, entitled “Cyber security implications of 3D printing”.

She told the conference, “When you look at manufacturers and ask them what their biggest security concerns are then you see that cybersecurity has become their number one concern in recent years, according to a Homeland Security survey in 2015. It used to be energy.”

”That is saying to us that the bad actors out there are targeting manufacturing more and more. The bad actors want to target your IP, whether it’s competitors, people opposed to your commercial or even moral objectives, there are the foreign actors who want to undermine US business, then there are the hobby hackers.”

Taylor explained that by its digital and networked design, additive manufacturing did present some “areas of vulnerability” include electronic access to private systems and networks, warning, “Remember that most production equipment has been made to be productive rather than secure. So when we are looking at all these great opportunities for 3D printing, cybersecurity should be at the forefront of our thinking. I’m sorry to bring you down a bit after these great technology descriptions but this is a mission critical issue.”