Autonomous vehicles get a push from lidar advances 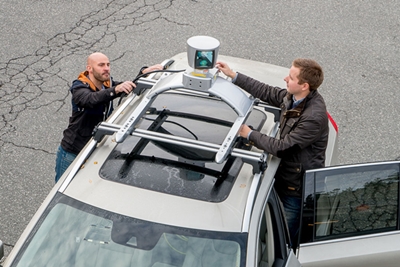 by Andrew Williams
In recent years, light detection and ranging (lidar) systems have emerged as one of the central enabling technologies in the development of autonomous - or self-driving - vehicles.

Analogous to radar but relying on infrared light instead of radio waves, the technique is now widely seen as a crucial requirement for the next-generation of autonomous vehicles – giving them the ability to react to potentially hazardous situations, prevent accidents and protect drivers, pedestrians and other road users.

Solid-state system
Several companies are now heavily engaged in the test and development of mounted lidar technology for use in both autonomous vehicles and so-called advanced driver assistance systems (ADAS). Among the players in the emerging sector is Quanergy, an automotive lidar and “smart sensing” start-up based in Sunnyvale, California.

At this year's CES (Consumer Electronics Show) in Las Vegas, the company launched its S3 LiDAR, which it claims creates a long-range 3D view of a self-driving car’s environment in real-time - and the ability to recognise objects in its surrounding area.

Shown integrated within the body of a Mercedes-Benz GLE450 AMG Coupe at CES, the S3 is a compact, solid-state lidar system with no moving parts. Instead, it employs an optical phased array transmitter, which is capable of guiding steady pulses of light by shifting the phase of a laser pulse as it is projected through the array.

Each of these pulses is transmitted in around a microsecond - in the process helping the S3 to gather in the region of one million points of data every second. Quanergy claims that the system will soon be available in production volume at a price of $250 or less, and in Las Vegas the technology also featured in live demonstrations by Quanergy investor Delphi and Nvidia, on board a Volvo XC90 and Mercedes SUV, respectively.

Retro reflectors
Quanergy wasn’t the only Californian company showing off new lidar systems at CES this year. Another one of the early front runners in the sector its Silicon Valley neighbor Velodyne LiDAR. Velodyne is better known for high-end audio equipment including headphones and sub-woofers, but has more recently developed an innovative and compact lidar kit – claimed to be similar in size to an ice hockey puck - that is being tested by the Ford Motor Company on its developmental self-driving cars.

As Wayne Seto, product line manager at Velodyne LiDAR, explains, the compact “Puck” design uses time-of-flight (ToF) methodology combined with reflectivity measurements to both precisely calculate the distance to nearby objects and potential hazards at high speed and to determine what kind of objects they are.

“All of the Velodyne LiDAR sensors operate with ToF methodology and generate 3D distance measurements,” he said. “Now the sensors also measure the reflectivity or intensity of the object as well so it can distinguish between black and white objects as well as retro reflectors."

Velodyne’s sensors feature integrated 8-bit resolution, used in a process that Seto describes as 'calibrated reflectivity'. In this scheme, zero represents the color black, while 99 represents white and numbers between 100 and 255 represent the various retro reflectors.

While all these optical components are standard, off-the-shelf, devices from third-party suppliers, Seto says that where the company's sensors distinguish themselves from their competitors is with the amount of data they generate. He says that this provides “a wealth of information to enable the software in autonomous cars to make the best and right decisions”.

He added: "Velodyne LiDAR sensors provide not only distance measurements, but also reflectivity values, and since it can 'see' 360° it provides a surround view of the entire environment so there are no blind spots.”

Looking ahead, Seto predicts that there will be a number of key innovations and developments in the design and use of laser and optics technology for autonomous vehicle lidar systems in the coming years.

"Over time, laser diode and detector suppliers will continue to develop better products and Velodyne LiDAR will make use of those products when they become available,” he said. “We will also look for lasers with greater optical output power so they can support longer ranges and more sensitive detectors.

"Obviously one big thing is that when our volumes increase we believe that the economies of scale will translate to more cost-effective components that we will use in our systems.”

Quanergy reveals Sensata deal
Meanwhile Quanergy, identified by Fast Company earlier this year as one of the top-ten most innovative companies in the automotive sector thanks to its 11-ounce S3 lidar, has just signed a strategic partnership with sensing industry giant Sensata Technologies, formerly the Texas Instruments sensors and controls division and a company boasting strong commercial relationships across the automotive industry.

“This partnership is a pragmatic way to extend our sensing capabilities into advanced driver assistance applications, one of the fastest-growing areas of transportation sensing. According to industry experts, the lidar market is expected to develop into a billion dollar market opportunity by 2020.”

Quanergy CEO Louay Eldada added: “We know that by teaming up with Sensata we’ll stand to benefit from Sensata’s new product launch and manufacturing expertise, deep customer relationships and global presence as the leading independent sensor supplier. Together, we are well positioned to become the leading provider of lidar sensors to the transportation markets.”

That deal, combined with the advances at both Quanergy and Velodyne, suggests that lidar is on the verge of becoming a far more commonplace technology in the automotive industry – first in ADAS applications, but perhaps more significantly as one of the key enablers of what is expected by many to be the autonomous vehicle revolution.