Suite of photonics-based equipment, including the first laser retroreflector to be placed on the red planet, begins journey to Mars. 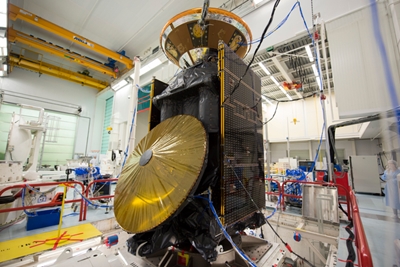 A host of optics and photonics equipment has been launched into space aboard the European Space Agency’s first ExoMars mission, to begin searching for signs of life on the red planet towards the end of this year.

Among the various pieces of hardware are – assuming a successful flight and touchdown - what will be the very first retroreflector on the Martian surface, plus a variety of visible, infrared and Raman spectrometers and imaging tools.

That kit was launched from the Baikonur cosmodrome in Kazhakstan early on March 14, with the ESA confirming successful separation of the three Proton rocket stages used to blast into space, and completion of the first of four “burns” that will propel ExoMars to its final destination.

This launch is in fact the first of two ExoMars missions, with the second scheduled for 2018. The payload inside the first launch includes a trace gas orbiter (TGO) that will look for the sources of methane previously discovered, and an “entry, descent and landing module” known as Schiaparelli.

The second mission will carry a rover and more complex suite of scientific instruments to Mars that will look directly for signs of microbial life on the planet’s surface.

Main objective: what’s the Martian methane source?
Ahead of the launch, ESA explained: “The main objectives of the TGO mission are to search for evidence of methane and other trace atmospheric gases that could be signatures of active biological or geological processes on Mars.”

ACS and NOMAD both rely heavily on photonics equipment, each comprising three spectrometers covering complementary wavelengths. They are set to take a detailed inventory of Mars’ atmospheric trace gases, monitoring seasonal changes in both composition and temperature to create detailed atmospheric models.

The instruments also have the capability to detect minor atmospheric constituents that may exist but have yet to be detected, ESA says.

To complement these measurements, CaSSIS will image and characterize features on the Martian surface that may be related to the trace-gas sources, like volcanoes. 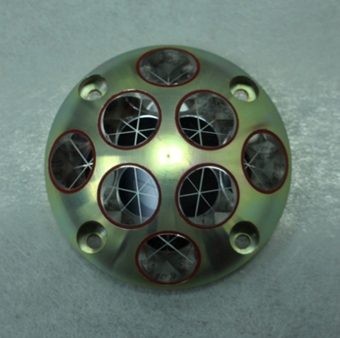 Retroreflector
Meanwhile the Schiaparelli module payload includes a cube corner laser retroreflector (CCR) on its zenith-facing surface. It will enable Schiaparelli to be located from Mars orbiters by laser ranging, both during the mission lifetime and afterwards.

“This will be the first time that a retroreflector has been placed on Mars,” ESA said, adding that the CCR would act as a fixed point on the Martian surface that could be used in the longer term for optical detection by future experiments, for example in the fields of Martian geodesy or general relativity.

The device is similar to the retroreflectors that were placed on the Moon by the Apollo astronauts and Lunokhod rovers, and which are still in use today.

The lightweight device, just a couple of inches in diameter and weighing only 25 g, could also support testing and diagnostics of any future attempts at laser communications between Mars orbit and instruments on the surface.

The retroreflector could also help detect trace atmospheric species performed by lidar equipment in orbit around the planet.

Laser desorption
In another echo of the Apollo missions, the Schiaparelli module also features a descent camera that will image the Martian surface as the landing site is approached, and help to generate a 3D topography model of the landing region.

The rover module that should be launched in May 2018 will feature a laser-desorption mass spectrometer that is part of the largest single instrument featuring in ExoMars. It is likely to become the primary focus of attention on board the mission’s rover as it roams the planetary surface looking for organic molecules.

Thanks to advantageous positioning of Earth and Mars at the moment, the first of the ExoMars missions should take only seven months to reach the red planet. Shortly before arriving at the Martian atmosphere on October 16, the Schiaparelli module will be ejected from the TGO – and should land three days later for a brief, four-day scientific mission.

Scientific work by the TGO will not start until a year later, after the craft has changed inclination and lowered its orbiting altitude to 400 km. The TGO is then scheduled for five years of work, including data relay operations supporting the rover mission once it arrives in early 2019.