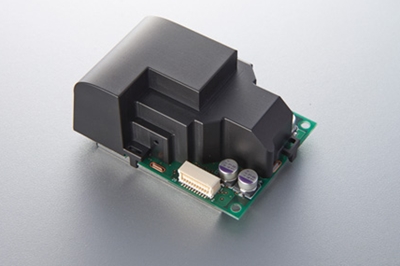 Smaller than an SEM...

Engineers at Mitsubishi Electric have developed a laser air-quality sensor designed to monitor levels of particulates in the atmosphere that are known to cause serious lung problems.

The Tokyo-headquartered electronics giant says that its prototype device is the first to detect all fine particles measuring no more than 2.5 µm in diameter – generally known as “PM2.5s” – and discriminate between pollen and dust. It is also said to measure the density of particles precisely.

Optics is at the heart of the sensor, which works on the principle of scattered light. Mitsubishi Electric claims that a unique, double-sided mirror design is able to collect nearly twice as much scattered light as conventional single-sided designs.

A proprietary algorithm is then able to distinguish between pollen and dust, based on the respective differences in the optical characteristics of their scattered light.

The air-quality sensor prototype is based around a laser diode, aspheric lens, light-collecting mirror, photodetector and airflow controller. The prototype measures just 67 mm (W) x 49 mm (D) x 35 mm (H), and the company says that it can detect particle sizes down to 0.3 µm in diameter.

Health hazard
PM2.5s and the larger “PM10” particulates are known to be a major health hazard, especially in urban areas. That is because they are small enough to get deep into the human lung, but large enough to remain stuck in the bronchial system. The US Environmental Protection Agency (EPA) identifies the smaller particulates as being of greatest concern, saying:

“Because of their small size (approximately 1/30th the average width of a human hair), fine particles can lodge deeply into the lungs.”

According to AirNow.gov, a web site set up by the EPA, National Oceanic and Atmospheric Administration and others, they pose a serious health risk alongside the larger PM10 particulates that are generated when dust is stirred up by vehicles on roads.

In contrast the smaller PM2.5s are produced by various combustion processes, including those in motor vehicles, power plants and residential wood burners.

While healthy people may only notice some irritation of the eyes and nose or a cough after inhaling them, others with asthma, or suffering from heart or lung diseases, can suffer far more serious effects. Epidemiological studies have shown a correlation between higher PM2.5 levels and increased mortality.

But detecting and measuring the concentration of PM2.5s is difficult, with AirNow.gov suggesting that they can only be seen with bulky, impractical techniques like electron microscopy.

In contrast, Mitsubishi Electric’s palm-sized device could be deployed easily around cities to provide reliable in situ data on fine particulate levels, with the information used to warn those at risk of ill health when levels rise.

Children ‘at risk’
The EPA estimates that as many as one in every three people in the US is at a higher risk of experiencing PM2.5-related health effects. “One group at high risk is active children because they often spend a lot of time playing outdoors and their bodies are still developing,” the agency warns.

“In addition, oftentimes the elderly population are at risk. People of all ages who are active outdoors are at increased risk because, during physical activity, PM2.5 penetrates deeper into the parts of the lungs that are more vulnerable to injury.”

Meanwhile the UK’s Department for Environment, Food and Rural Affairs (DEFRA) cites a World Health Organization (WHO) report suggesting that there is no safe threshold limit below which there are no adverse effects from inhaling PM2.5s.

“The biggest impact of particulate air pollution on public health is understood to be from long-term exposure to PM2.5, which increases the age-specific mortality risk, particularly from cardiovascular causes,” DEFRA reports, although it is not yet clear exactly why this is.