Retina Implant wins €26 million in round of private funding

Retina Implant's microchip is implanted below the retina, in the macular region where light-sensitive photoreceptor cells are located.

Retina Implant, Reutlingen, Germany, a developer of subretinal implants for patients blinded by retinitis pigmentosa (RP), has announced the completion of an €26 million round of private equity funding. The company said the funding represents a “significant recommitment by both its long-standing investors and new investors”. The cash will be used to establish new clinical centers around the world and help the company to initiate reimbursement applications for its CE-marked Alpha IMS subretinal microchip in key markets.

Retina Implant has a long-standing relationship with its investors with many having been among the early investors in the company's subretinal implant technology in 2005. The investors have a proven track record of participating in various successful ventures. A key investor is Max Reindl, founder and CEO of Wavelight Laser Technologies, now part of eyecare technologies company Alcon.

“The results of Retina Implant's clinical trials and the receipt of CE Mark approval of the Alpha IMS device demonstrate the company's ability to restore some artificial vision to those living with RP,” he said. “This is one of the most fascinating projects I have ever seen and I am convinced that this company has a bright future.”

This €26 million investment follows a strong year in 2015 for the company; new trials have commenced in Germany and the UK. This has been further bolstered by a pipeline of clinical trial results. “The latest data shared at the American Academy of Ophthalmology Annual Conference last year, demonstrated further efficacy of our subretinal Alpha IMS Device,” the company said in the funding announcement.

Dr. Walter-G Wrobel, CEO, said, “This re-investment is incredibly important to us as it indicates our investors' belief in our vision. This continued commitment will allow us to make great leaps forward to take this technology to the people that need it most. We are simultaneously developing the resource of skilled retinal surgeons who can perform the procedure while working with the local insurance agencies to establish reimbursement for the device.” 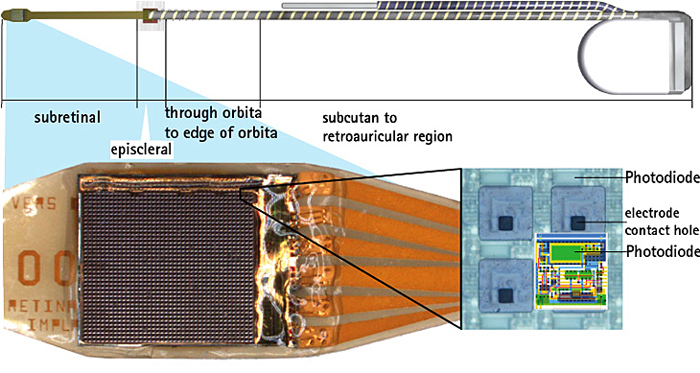 Retina Implant develops its subretinal implants for both partially sighted and blind patients. After extensive research with German university hospitals and institutes which began with a large grant from the German Federal Ministry of Research and Education.

The company was founded in 1996 by Dr. Eberhart Zrenner, professor of Ophthalmology, at the University of Tübingen and his colleagues in 2003. Their aim is to develop a fully-functioning electronic retinal implant to restore useful vision to the blind. Retina Implant began implanting human patients in 2005 and started a second, larger, clinical trial in 2010. In July 2013, Retina Implant's wireless subretinal implant technology, Alpha IMS, received CE mark.