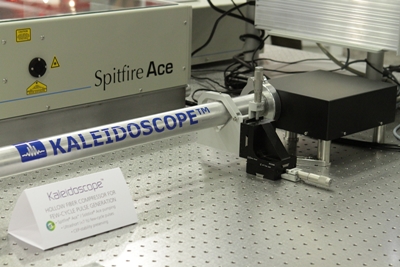 Newport and its iconic Spectra-Physics laser brand are set to become a part of the metrology firm MKS Instruments, after the two companies agreed a $980 million sale.

The all-cash, debt-financed transaction values Newport at $23 per share – around a 50 per cent premium on the company’s February 22 closing price on the Nasdaq exchange.

The combination will command annual revenues of around $1.4 billion, with Newport slightly the junior partner in terms of annual sales. The Californian photonics company, whose other well-known brands include Ophir, New Focus, and Oriel, announced 2015 sales of just under $603 million at the same time as the MKS deal.

Control and monitoring
Massachusetts-based MKS specializes in control, analytical and monitoring products that it sells to semiconductor manufacturing equipment customers, and which are in turn used in silicon chip, flat-panel display and solar cell production.

In a company statement, MKS’ CEO Gerald Colella said: “This acquisition is consistent with our strategy to pursue sustained profitable growth by expanding into adjacent markets while increasing our served addressable market in our core semiconductor business.”

Long-time Newport chief Robert Phillippy added that the two companies’ technology and customer bases were “highly complementary”, although there will inevitably be a certain amount of overlap in terms of company functions.

Those are set to be eliminated over the next three years, in what the two firms describe as $35 million of “annualized cost synergies”, the accepted corporate jargon meaning cost savings.

Exactly what those savings will entail remains to be seen, although in an investor presentation MKS said that it would make “infrastructure savings” by combining similar locations. Both companies are active in 15 countries. Combined with “income tax planning opportunities”, the savings will be reinvested into strategic research and development activity, and sales and marketing functions.

Addressable market
MKS reckons that its foray into the photonics sector will increase its “serviceable” addressable market by $4.8 billion. While Newport also counts the semiconductor manufacturing equipment market as its largest – significantly so in periods of strong demand - the most obviously complementary parts of the Newport business include sales of lasers and other equipment to the scientific research and life sciences sectors.

Newport currently employs around 2500 people, of which 360 work in research and development activity – a near-identical number to the MKS figure.

Following the merger, which is expected to complete by the end of June pending Newport shareholder and regulatory approval, the combined entity will make around half of its sales from the semiconductor industry. That represents a significant diversification for MKS, where the equivalent figure is currently closer to 70 per cent.

The deal comes during a period of significant consolidation at all levels of the semiconductor market – with the knock-on impact on the direct supply chain and related photonics companies now becoming apparent.

$800M debt finance
Late last month, MKS reported a 15 per cent year-on-year decrease in sales and lower profits as the squeeze on suppliers in the semiconductor industry continued – although CEO Colella said that the recent softening had “abated somewhat” at the very end of 2015.

As of December 31, 2015, the company listed $228 million in cash and equivalents on its balance sheet, as well as $431 million in short-term investments. To finance the Newport acquisition, MKS will use up to $800 million in new debt via Barclays and Deutsche Bank, as well as a $50 million revolving credit line as required.