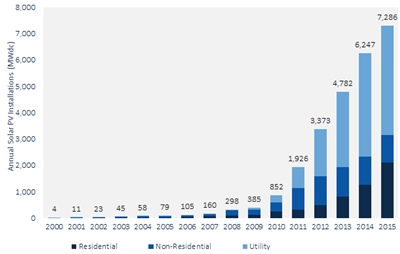 Cumulative installations of solar PV in the US now top 25 GW, after additions in 2015 surpassed nearly all other sources of electricity – including natural gas.

According to preliminary figures from Greentech Media Research and the US Solar Energy Industries Association (SEIA), 7.3 GW of PV was added to the grid in 2015 – up 17 per cent on the 2014 figure.

As usual, that charge was led by California, although the geographical spread of solar electricity is starting to become more diverse, with 13 states installing more than 100 MW last year. Utah and Georgia moved up the rankings most significantly in 2015.

Referencing both the market growth and the surprise extension to the solar investment tax credit (ITC) agreed by Congress in December last year, SEIA CEO Rhone Resch said: “Without a doubt, 2015 was a monumental year for the US solar industry, and perhaps what’s most amazing is that we’re only getting started.”

He added: “Over the next few years, we’re going to see solar continue to reach unprecedented heights as our nation makes a shift toward a carbon-free source of energy that also serves as an economic job-creating engine.”

Despite the geographical diversification, Greentech Media analyst Shayle Kann said that the US solar market remained concentrated in key states. “The top ten states accounted for 87 per cent of installed capacity in 2015,” he pointed out. “But growth has been widespread, and 24 of the 35 states that we track saw market growth in 2015.”

Steep curve
The latest figures show that solar PV deployments have increased by close to an order of magnitude in the US since 2010, when only 852 MW was installed.

In stark contrast the European market has shrunk dramatically since peaking at 22 GW back in 2011. That is the result of cuts to feed-in tariff support, caps on what had been overly generous subsidies, and general economic torpor – and comes despite the fact that PV panels are far cheaper now than they were five years ago.

In the US, installers at the utility, commercial, and residential level are now able to take advantage of those cheaper panels. And while utility-scale deployments – historically the largest chunk of the US market – grew only 6 per cent in 2015, the residential sector expanded by 66 per cent and accounted for nearly one-third of the total PV market.

According to the Greentech analysts, the latest figures mean that, for the first time, more PV generating capacity was added to the US grid than that of natural gas. PV also accounted for 29.5 per cent of all new generating capacity, it claims.

But while the cumulative PV capacity installed now tops 25 GW (at peak output), new figures from the US Energy Information Administration (EIA) state that total electricity generating capacity in the country currently stands at around 1.1 TW – meaning that PV accounts for just over 2 per cent of total capacity.

• Greentech Media Research and SEIA are set to release more details and a fuller analysis of the latest figures in their US Solar Market Insight 2015 Year in Review report on March 9.