While indices have plummeted globally, the stock price of the photonics company is up 70% since October. 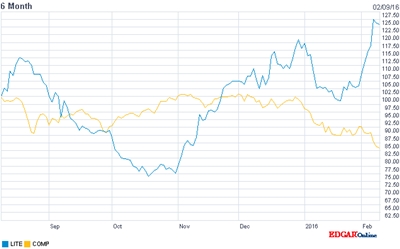 Against the grain: LITE stock price (vs Nasdaq, past six months)

The Nasdaq composite index may have dropped in value by 12 per cent since October, but one of its newest constituents – the photonics company Lumentum – has defied that trend, rising nearly 70 per cent over the exact same period.

Trading under the ticker symbol “LITE” since spinning off from parent company JDSU last August, Lumentum has just posted financial results for its second quarter of independent trading, with sales up 3 per cent year-on-year to $218 million.

That might seem a marginal change, but with profits also up and CEO Alan Lowe telling an investor call that demand for its optical communication products has strengthened, Lumentum’s stock price ticked past $24 on February 9 – representing the firm’s highest valuation since the JDSU split.

“We expect our third quarter datacom revenue will be up due to the strong traction of our 100G products,” Lowe said. “We also expect our 100G datacom products to be a major growth driver of our business moving forward.”

Demand from both China and North America are the chief reasons for that confidence, defying the well-worn concerns over the former’s economic growth as Lumentum’s bosses forecast sales of between $222 million and $232 million in the current quarter – despite it coinciding with Chinese New Year celebrations.

Fiber laser capacity issue
With its income statement still dominated by sales of optical communications products, that strong demand was enough to offset an 18 per cent year-on-year decline in sales from Lumentum’s commercial lasers division.

Revenue of $32.5 million for the lasers division was down from $39.4 million a year ago, impacted by a slowdown in semiconductor equipment spending and problems meeting demand for kilowatt-scale industrial fiber lasers because of a component shortage.

Lumentum had reported a similar capacity issue last June, and although that was thought to have been fixed, Lowe told investors:

“We developed a new process in order to overcome the manufacturing issue and increase our fiber laser output, but we have had challenges in ramping this up sufficiently yet to meet our customers’ strong demand.” As a result, quarterly sales of kilowatt fiber lasers slipped to around $10 million, he said.

On the plus side, the CEO added that sales of its new ultrafast lasers – technology acquired through the buy-out of Switzerland-based Time-Bandwidth Products back in 2014 – had grown in the quarter and helped to boost profit margins.

However, the laser division’s sales still only account for around 15 per cent of Lumentum’s total revenues and it is the ebb and flow in demand from the communications sector that remains the critical trend determining the company’s financial fortunes.

“Demand from China and our customers supplying into North America metro builds is particularly strong,” said Lowe. “The investments we made in industry-leading products, including 100G components and modules, amplifier and pump lasers, and ROADMs (reconfigurable optical add/drop multiplexers) position us very well.”

Blurred [fiber-optic] lines
The CEO reckons that Lumentum has also gained market share at key customers who are selling into the metropolitan communications sector, prompting record sales of 100G modulators and tunable lasers but also leading to some capacity constraints.

“We saw a robust demand across the range of our telecom products, but were capacity-constrained on many product lines. We are adding capacity as we expect strong demand to continue throughout calendar 2016.”

And although sales of pump lasers for undersea cable projects were down because of project delays, Lowe expects that market to recover in the second half of the year.

The CEO added that the traditional distinction between telecom and datacom is becoming less obvious, both in terms of the customer base and its required technologies. “Traditional telecom network operators look more like cloud and data center operators every day, in the services they offer to the market and the underlying networks and data centers they build,” he observed.

“These trends and their requirements they place on the underlying technology and manufacturing capability play directly into our strengths and our technology leadership,” he boasted.