Stock drops 10% but the industrial laser firm says it will be first to market with 2.5kW fiber laser modules later this year. 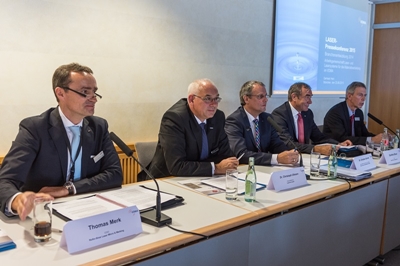 For the three months ending December 31, sales came in at $112.5 million, down 8 per cent on the same period last year. Net income rose 6 per cent to $6.5 million, but the company’s stock price dropped 10 per cent after the results were released.

That appeared to be prompted by weaker than expected guidance for the year and news of order cancellations in China totalling $12 million, with lasers no longer required by certain solar cell manufacturers.

Discussing the latest quarter with investors, Rofin’s Merk said that although the quarterly sales figure was down on the prior year, it was “broadly in line” when calculated on a constant-currency basis.

Unsurprisingly, activist investor SilverArrow – which owns around 10 per cent of the company and is engaged in a war of words with Rofin management - wasted no time in attacking CEO Thomas Merk and his team once again, claiming that the apparent improvement in margins merely reflected the impact of the strong US dollar.

Streamlining
SilverArrow has been highly critical of Rofin’s operational structure, and Merk pointed to the recent merging of subsidiaries DILAS and m2k-Laser as evidence of progress on that front – adding that more streamlining actions were in the pipeline.

But that cut little ice with SilverArrow, which immediately issued a response to the earnings release describing it as “another lackluster quarter”, and pointing out that DILAS and m2k-Laser have both been part of the Rofin group for several years.

Turning to the China cancellations, SilverArrow added: “We believe the lost order shows a continued lack of awareness of the developing macro issues in the region. The entrenched board seems to have lost sight of the international market.”

SilverArrow is seeking to replace three of the directors on the Rofin board with its own candidates at the company’s next general shareholder meeting, which Merk told investors would likely take place in March.

2.5kW fiber module
On the development front, the CEO added: “We successfully tested our new 2.5 kilowatt fiber laser that only uses one single fiber laser module, and we are on track to commercially launch this laser in 2016.”

Merk reckons that Rofin will be the first to market with the higher-power module, which should enable it to offer a 5 kW laser based on only two combined modules. “We believe this will enhance our competitive position, and we already have had constructive discussions with a number of OEMs,” he told investors, adding that the switch ought to reduce system manufacturing costs by as much as 20 per cent.

Like other vendors of high-power fiber lasers, Rofin is up against IPG Photonics, whose long-standing vertical integration has enabled it to produce state-of-the-art lasers extremely competitively. IPG is set to announce its own latest quarterly figures February 12.

Merk also took the unusual step of revealing that sales of high-power carbon dioxide lasers had declined to the point where they now represented only 9 per cent of total sales – even though Rofin’s overall carbon dioxide laser business was roughly flat.

“Why do we disclose this number?” he asked investors. “We want to give you a feeling that even if the high-power [CO2 laser] business declines slightly, this effect is not really material for the company. Rofin has successfully shifted the technology transition towards high-power fiber lasers already.”

Fiber laser shipments
Those comments and the focus on Rofin’s 2.5 kW fiber module development appear to be a response to another of SilverArrow’s criticisms – that the company was slow to wake up to the potential of fiber lasers and did not sufficiently focus its research and development efforts on that technology.

Merk and his colleagues pointed out that unit sales of high-power fiber lasers had risen 36 per cent year-on-year, with the company having shipped nearly 350 over the past 12 months.

“We are now currently in a range that we can do 15 to 25 fiber lasers [each] week,” he said, adding that new shift patterns should increase that number further by solving a bottleneck in production.

While the fiber laser developments sounded positive, the general weakness in China has prompted Rofin’s executives to cut their sales outlook for the full year, with the company expecting revenues to range between $495 million and $525 million. Last year’s total was just under $520 million.

Coupled with a downgrade from analysts at Longbow Research ahead of the results call, that outlook saw Rofin’s stock price drop around 15 per cent in value in four days. Closing at $21.64 on the Nasdaq exchange on February 4, the company’s market capitalization stood at just under $614 million.