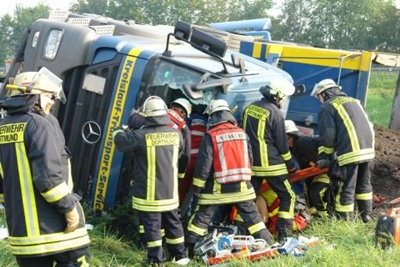 A new mobile fiber laser system for cutting through steel and freeing people trapped in cars after serious road accidents is under development in Germany, thanks to funding from the Federal Ministry of Education and Research (BMBF).

They are aiming to develop a high-power system capable of cutting through materials like high-tensile steel much more quickly than conventional cutters.

Safer but tougher
While strengthened steel is credited with improving overall vehicle safety because it is better able to retain structural integrity and withstand severe crashes, those same properties mean that it is extremely difficult to cut through when emergency services need to free people from the resulting wreckage.

LZH says that the project is aiming to develop a compact laser unit that could be used when conventional rescue tools either reach their limits or will take too long to cut through the toughened chassis materials.

It reported: “With this system it shall be possible to cut modern materials in a short time, or to broach them so that they can be cut faster with conventional tools.”

Michael Hustedt, head of the safety technology group at LZH and involved in the project, told optics.org that a fiber laser would be used, as it is a very flexible source. With Rofin-Sinar now part of Coherent, the project partner has access to two different fiber laser technologies developed by the two firms prior to their merger.

“The laser power we intend to use is a few kilowatts,” Hustedt said. “It has to be usable in a mobile processing system.” He added that the laser would be powered through a conventional power engine that would be integrated on a fire-fighting vehicle.

“The consortium contains the Institute of Fire Service and Rescue Technology of the Fire Department of the City of Dortmund and the company Weber Hydraulik Group with their rescue systems department,” Hustedt explained. “They will, amongst others, deal with the power source.”

Extra safety measures
Given the kind of laser powers that would be needed for the application, a key element of the project will be to develop appropriate safety measures, including shut-off devices and eye protection.

Hustedt said of that aspect: “The investigation and development of adequate safety measures to protect the persons at the scene of a road traffic accident, including the rescue team and the person(s) to be rescued, is an integral part of the project.”

The consortium is aiming to develop safety measures that can be integrated into the laser processing head, as well as beam dumps, local screens to protect any injured person near the processing zone, "global" screens such as curtains to enclose the laser area, and laser goggles to protect the eyes of the people at the scene.

Joining LZH, Coherent, and Volkswagen on the project are several other industrial partners, including the Salzgitter-based laser hardening and cladding specialist Eifeler Lasertechnik, and the laser safety company Laservision, among others.