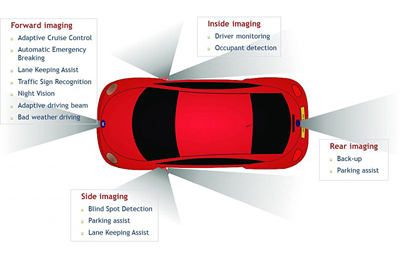 The report details ADAS functions and analyzes the technologies that fulfill them.

The market for advanced driver assistance systems (ADAS) is “on the verge of a tipping point”, according to Tractica, a Boulder, Co, US-based market analyst. This change is driven largely by the need for improved safety, whether from legislation, standards or the desire to achieve top crashworthiness ratings.

A new market report from Tractica, entitled Advanced Driver Assistance System Market Forecasts, says that sales of ADAS components will “increase at a healthy pace over the next decade” – rising from 218.1 million units shipped in 2016 to 1.2 billion units by 2025. By that time, the market intelligence firm forecasts that the value of the ADAS component market will reach $89.3 billion in annual revenue.

Principal analyst Keith Kirkpatrick commented, “Advances in a number of fields, including camera and imaging technology, high power, low energy consumption processing, advanced neural networks and data processing, and others, have shifted the focal point of technology innovation from the computer in the 1990s, to the mobile handset in the 2000s, and in the current decade, to the automobile.”

He added that, while fully connected and autonomous vehicles are likely still a decade away from hitting the roads en masse, the stepping-stone technologies that will be refined and improved upon for the driverless cars of the future are rapidly being integrated into the vehicles of today. 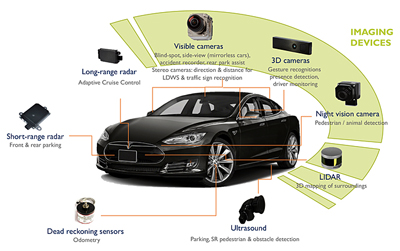 Imaging technologies are finding ever more roles in the latest car models.

Besides the many categories of ADAS technology included in Tractica’s analysis, which are analyzed by type and regional sales prospects, the report answers questions such as: what are the projected shipment volumes and revenue figures for such components; what are the most popular current ADAS systems, and which world regions will feature the highest adoption of ADAS systems.