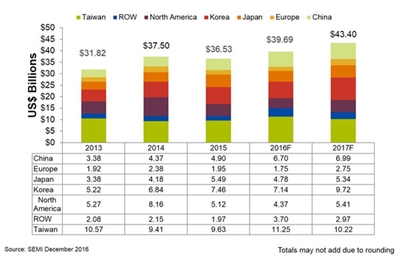 In its latest forecast for the chip industry, the Semiconductor Equipment and Materials International (SEMI) member organization is predicting a second consecutive year of solid sales growth as dozens of new device fabs begin operations.

Worldwide sales of equipment for front-end wafer production, including new lithography tools, wafer inspection and other kit – much of which features lasers and other optics and photonics technology - are expected to rise around 9 per cent both this year and next.

If correct, the predicted $43.4 billion total for 2017 would represent a significant recovery from 2015, when the annual market shrank by around 2.5 per cent to $36.5 billion.

62 new fabs
A year ago, SEMI’s analyst Dan Tracy had predicted that worldwide equipment sales in 2016 would amount to $36.7 billion, but that total has now been up-rated to $39.7 billion. And earlier this year he said that 2017 sales would rise to only $42.1 billion, suggesting that the equipment market is gathering previously unexpected momentum.

Wafer processing equipment represents by far the largest chunk of this year’s total, at $31.2 billion, while sales of semiconductor test and measurement kit have jumped 16 per cent to $3.9 billion. The third key segment, assembly and packaging equipment, is up nearly 15 per cent and accounts for $2.9 billion.

“For 2016, Taiwan and South Korea are projected to remain the largest spending regions, with China joining the top three for the first time,” SEMI announced. The rest of the world, largely comprising Southeast Asia, is expected to lead in terms of growth with 87.7 per cent, followed by China at 36.6 per cent and Taiwan at 16.8 per cent.

But next year it is the European region that will lead growth, with an anticipated increase of more than 50 per cent, to $2.8 billion, recovering from a contraction of 10 per cent in 2016. 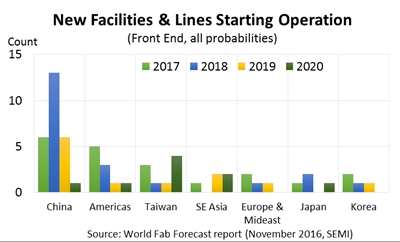 Driving that growth are some 62 new front-end facilities that are expected to begin operations between 2017 and 2020. SEMI’s new World Fab Forecast says that the 62 sites – a combination of seven research or pilot facilities and 55 volume production fabs – will be led by China, where 26 of the facilities are located.

Six new Chinese fabs are expected to start up next year, with another 13 in 2018. The Americas region will see the next-largest expansion, with ten new production lines, of which five will start operations next year.

Last month SEMI reported Lung Chu, the president of its Chinese wing, as saying that the country’s growth in semiconductors would “profoundly affect” the global industry pattern.

Chu added that because the barrier to entry in the sector is high, government support and guidance would be needed in the early stages. But, in a blow to those aspirations, within the past week the planned buy-out of key LED wafer equipment supplier Aixtron by a Chinese private equity group has been blocked by US authorities.

According to a recent Bain Insights article in Forbes magazine, national and regional governments in China will together invest some $104 billion in the domestic semiconductor industry over the coming decade.

The strategic plan is intended to address the fact that China still only produces around 15 per cent of the semiconductors that its population consumes – even after hefty investment over the past few years.