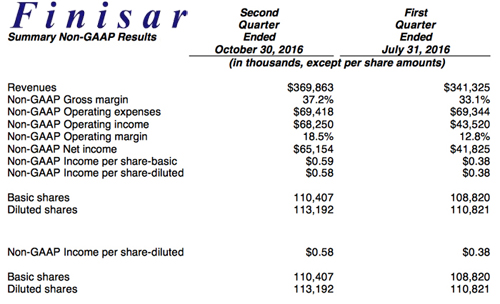 Jerry Rawls, Finisar's CEO commented, "I am pleased to announce that Finisar has achieved all-time quarterly records for revenues and profits in our second quarter. Our gross margins improved significantly due to a favorable product mix and leverage achieved from our vertical integration with larger volumes." 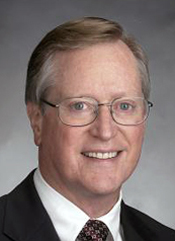 In the associated analysts’ conference, Finisar’s CEO Jerry Rawls detailed a particular market opportunity in China: “We will be shipping wavelength-selective switches into China in the next quarter, as we also did in the last quarter. The project could be huge. There is a lot of debate about when exactly it’s going to kick-off with big orders and deployment is really going to begin in earnest, but the consensus from everybody is that it will be in calendar 2017.”

Analysts at such results conferences are typically non-committal about their views of company performances but, notably, Finisar’s second quarter figures excited Alex Henderson from Needham enough to make him comment to Rawls, “Wow, you guys are really rocking!”, to which the boss replied, “You bet.”

Another analyst Troy Jensen, with Piper Jaffray, asked Kurt Adzema, CFO, about Adzema’s earlier comment that 35% was the right gross margin level for this industry. Jensen asked, “What do you think the gross margin profile is for Finisar in this industry?”

Adzema replied, “Certainly we’ve had quarters where we have been above 35% and we are above that now. Looking to the future, it comes down to revenue growth, product mix, and the competitive environment. Trying to predict multiple quarters is challenging in our industry, but obviously we are very optimistic now, and we are very pleased with where our margins were last quarter and with our guidance this quarter.”

Dmitry Netis, with William Blair, asked Rawls an old chestnut of an optical communications industry question: did he foresee copper still being used in this environment?

In response, Rawls gave a detailed technical analysis of this dynamic sector, in which copper connections are stubbornly refusing to be eradicated by optical solutions: “We are positioned very well because we are the biggest supplier in the datacom industry. Most of the server connections, server to server are copper. Some of the server to top of rack switch are optics, but most are still copper and this is 10 gigabit lanes and our 25 gigabit lanes.

“The switches from the top of rack switch to the aggregation switches are predominantly optical, and the rest of the connections in the data center are optical. The question is going to be, as Tomahawk goes to third-generation, so Tomahawk and the lanes become 50 gig PAM4, not 25 gig, can the connections within the server still be copper at those speeds and the answer is, I don't know.

“The distances get shorter and shorter and I think the optics share of that business for sure will grow, but it is hard for me to predict the complete demise of copper in some connections. In some cases they're only a foot or two long."