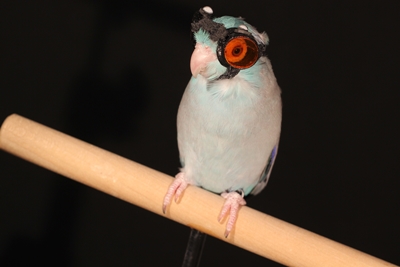 Researchers at Stanford University have used a high-speed laser imaging technique to directly view the wake turbulence generated by a bird in flight for the first time – and discovered that the models currently used to calculate lift generated by animal wing-beats are wrong.

David Lentink and colleagues from the California university say that the particle imaging velocimetry (PIV) experiments showed how airflow vortices created by a parrotlet’s wing-beat patterns broke down violently.

That “vortex breakdown” is similar to the effect seen in the wake turbulence created by airliners, and its challenge to the accepted theories of bird-flight dynamics could have implications for engineers developing “bioinspired” drones based on flapping wings.

Lentink said: “Freely flying animals shed well-defined vortices in their wakes, which are shaped by the aerodynamic lift forces generated by the wings and body. The vortices are little ‘air tornadoes’, which result from how the animal – in this case a bird – manipulates the air with its flapping wings to generate aerodynamic lift.”

Having analyzed the three-dimensional dynamics of the tip vortex in great detail, the researcher says that the findings were surprising. “The bird’s tip vortices broke down violently and quickly about two or three wing-beats after they were generated,” Lentink explained. And although this breakdown is commonly seen in the tip vortices generated by airliners, creating the familiar sight of long contrails behind the plane, it has never previously been observed in bird flight.

“Based on these velocity measurements, it is theoretically possible to calculate the lift force generated by the bird at the moment it sets the air in motion,” Lentink added. “However, we found that the three most commonly published lift models, and their many variations, failed to predict the lift generated by the bird.

“We thus found that not only the vortices, but also the well-accepted theories for calculating lift, broke down.”