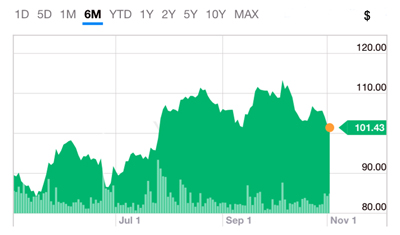 Laser giant Coherent yesterday announced “record” financial results for its fourth fiscal quarter (Q4) and full financial year that ended October 1, 2016. For Q4, the company reported net sales of $248.5 million. Non-GAAP net income for the quarter was $40.5 million, up 30% on the $31.2 million income achieved the prior year’s equivalent quarter. Non-GAAP net income for Q3, 2016 was $26.2 million.

Coherent shares have increased in value by 56% since the beginning of the year. In the final minutes of trading on November 2, when the latest results were announced, shares hit $101.43, representing a rise of 82% in the past 12 months.

As previously announced, in March of this year, the company confirmed it was in the process of acquiring fellow industrial laser maker Rofin-Sinar Technologies. Pending completion of administrative matters, Coherent expects to close the all-cash transaction (at a price of $32.50 per share, valuing Rofin at $942 million) in the first few weeks of November, 2016.

John Ambroseo, Coherent’s President and CEO, commented, “Coherent had a very strong fourth fiscal quarter that capped a record year. Our product mix and volume were favorably aligned, especially within our flat-panel display business, enabling us to handily exceed the high end of our long-term earnings goals. Record backlog and a strong order pipeline have us very well positioned for fiscal 2017.”

“We are also pleased to have received clearance from the European Commission to complete the acquisition of Rofin – conditional on the divestment of Rofin’s low-power CO2 business in Hull, England,” Ambroseo added. Coherent ended the year with cash, equivalents and short term investments of $400.0 million, an increase of $26.4 million on its holdings at July 2, 2016. 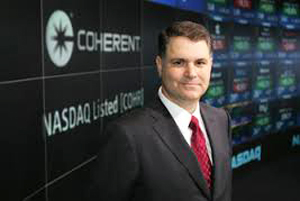 In the analysts conference accompanying the financial announcements, John Ambroseo gave further details of how demand from the company’s key markets had helped drive up sales and profitability.

“All sub markets in bio instrumentation are enjoying very good demand, in flow cytometry, market adoption of test protocols and the proliferation of desktop instruments from existing and new market entrants are fueling growth. Bookings for confocal microscopy were solid. Our efforts in high-speed gene sequencing are paying off. The medical OEM market is being affected by M&A activity and reorganizations within existing customers, which is causing changes in demand, inventory practices, and R&D spending.

“Some customers are adding capacity to take a larger share of the first wave of OLED adoption. Others are convinced OLED will replace LCDs everywhere, from handsets to mobile computing to TVs and signage. They are securing capacity to capitalize on these potential trends. As a result we have already booked $100 million of new orders in the current quarter, which fills out most of our existing 2018 capacity.”

Analyst Larry Solow, from CJS Securities, asked about whether competing companies were in a position to deliver alternative sources into Coherent’s key excimer laser markets.

Ambroseo replied, “We have shipped a variety of different lasers into this application space, and we've worked extensively with customers exploring if there are alternatives out there. Can you anneal panels using other lasers? Yes, you can. Can you get the combination of outcomes with other lasers that you get with an excimer source. No one has demonstrated that.

”So if the question is how long would it take somebody to come up with a competitive excimer laser, quite frankly we think it's years, because it's not just building a box, it's being able to achieve the performance criteria and the performance lifetime. I have no doubt that other laser companies will try to after this market.”