Losses widen at Electro Scientific as sales and bookings slip 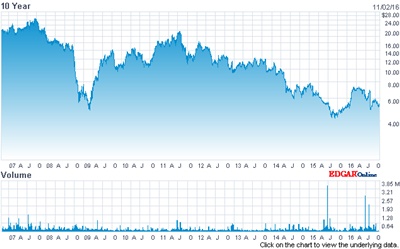 Electro Scientific Industries (ESI), the Portland-based provider of industrial laser systems, has reported a net loss of $9.7 million in its latest financial quarter, after sales slumped by nearly 40 per cent year-on-year, to $29.7 million.

Bookings also slipped back, with the company’s new CEO Michael Burger reporting that customer interest in new products such as the “Cornerstone” via drilling system is yet to translate into significant sales revenue.

Overcapacity issues
ESI is suffering from overcapacity in key markets, reflected in slow bookings and sharply lower profitability, although customer quote activity is said to be ticking up a little. Looking forward to the current quarter, the ESI executive team is expecting sales to remain flat until the end of 2016.

Despite the difficult market environment, Burger said that he was “thrilled” to take on the challenges faced, and is focused on returning the company to sustained profitability.

He told investors: “Our second quarter was challenging for ESI, with short-term overcapacity in our core business resulting in sequentially lower revenues, earnings, and cash flow. The team reacted appropriately to the change in market environment, by controlling operating expenses while keeping focused on our long-term growth initiatives.”

ESI has undergone something of a strategic overhaul in recent years, with Burger paying tribute to the efforts of his predecessor Ed Grady to open up the company to new market segments – and for staying on to help ESI get over the current tough period. Burger added:

"I'm happy to be at ESI, and I am excited by the potential for growth. The technology at this company continues to amaze me."

Lumpy order patterns
Part of the difficulty for ESI is that it received a raft of orders for “flex drilling” laser systems last year, largely for its GemStone system, which features a nanosecond-pulsed ultraviolet laser source and is used in smart phone production.

Now that ESI’s customers are digesting all that new capacity, there is consequently lower demand before smart phone production lines are once again upgraded for a new generation of device manufacturing.

“There is a reticence [among] customers to make further capital investments at this time,” Burger observed, adding that while the precise timing of any future orders was unknown, the uptick in demand usually arrives in the early part of the calendar year as phone manufacturers gear up to manufacture their new products in time for the holiday period.

One of the new products that ESI has high hopes for is its “CornerStone” system for drilling PCB microvias. This system is based around a picosecond laser, and is said to be 25 per cent smaller than rival products.

Although uptake has been slower than the company initially expected, the first of the CornerStone units is now being qualified by ESI’s lead customer, while a second was recently delivered to another user.

Those systems typically sell for anywhere between $1.2 million and $2 million, depending on exact specification, and Burger believes that the total global market for such technology would amount to somewhere between $50 million and $75 million.

• Ahead of the latest ESI earnings call, the company's stock price stood at just over $5 on the Nasdaq exchange, equivalent to a market capitalization of around $160 million.